Myth is malleable. Myth is fun. Myth is thought-provoking. No surprise then that in every generation artists turn to myth for inspiration. This post is dedicated to a whistle-stop tour through art inspired by a two-fold love of ancient Greek vases and Star Wars. Yes, celebrating the release of Star Wars: The Force Awakens, we’re looking at the modern myths of Star Wars as channelled through that classic art-form, the vase scene. If we’ve missed one you love, feel free to post it in the comment section. This post contains no Force Awakens spoilers, but plenty for parts I-VI. 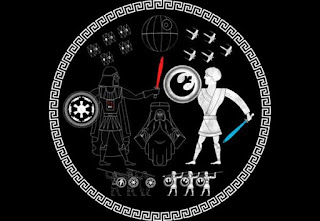 Above, Vader vs Luke, by Wharton.

We begin with this fabulous combat scene by Wharton, a designer at designbyhumans.com. It gives us the monumental fight between Darth Vader and Luke Skywalker, channelling the famous Rhodian plate: 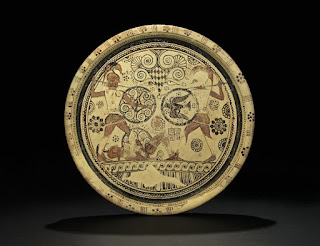 Wharton has captured the lay-out nicely, including the additional features that fill the space around the main figures. The Greek plate, made on the island of Rhodes in the late 7th century, features Menelaus (left) and Hector, fighting over the body of Euphorbus. The decorator has captioned the figures to make sure we know who they are. Book 7 of the Iliad describes the action. Menelaus ran to protect the body of Patroclus when he saw him die; Euphorbus tried to win the body back so he could strip its valuable armour. Menelaus stood over Patroclus ‘as a mother-cow stands over her first calf’, and killed Euphorbus, ‘stabbing him in the base of the throat… through his soft neck.’ Hector ran to protect the body of Euphorbus. The Rhodian plate shows them sizing each other up for the fight. The Iliad describes Menelaus backing away, as he knows Hector is the better fighter. In vase iconography, the winner is usually depicted on the left of the scene. Wharton has echoed that effectively by placing Vader on the left, with Luke on the right, even though the Rhodian plate has Menelaus on the left. Vader and Luke have been given shields to up their Greekness. They should perhaps be holding their light sabres as spears, but instead we see them fighting with light-sabre-like leaf-blade swords. Still, a nice piece of work that makes sympathetic use of the ancient lay-out and a simple palette. 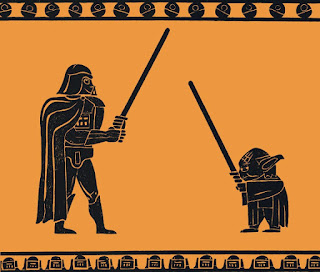 Above, Vader vs Yoda, by Andre Minoru Asai

This next piece you might recognise from an earlier post on vase-remixes. It's by Brazilian-based Andre Minoru Asai, aka. asaifactory. The image has less detail than Wharton’s piece, but what it lacks in tie-fighters, it makes up for in clarity of vision. We’ve got the intense orange and black contrast that we know and love from Attic pottery, and a Greek key of death stars and droids across the top and bottom. In the Star Wars films, Yoda and Darth Vader never fight each other, but vase remixes, like ancient vases, can play around with myth, making tweaks and changes as the artist sees fit. 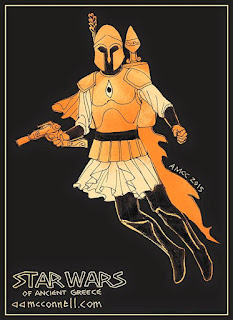 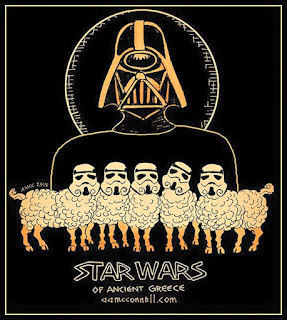 Above, Hoplite Bobba Fett and Cyclops Vader, by Aaron McConnell.

The next two pieces are a bit different, really going to town merging Star Wars characters and ancient features in an illustrative style that draws on Greek vase scenes. The hoplite-like helmet of Bobba Fett’s Mandalorian panoply is really brought out in this drawing. (A topic we’ve looked at in a previous Star Wars post). The Cyclops Vader is really inspired – myth lovers will remember that the Cyclops Odysseus encounters, Polyphemus, is a shepherd who lives with his flock of obedient sheep. 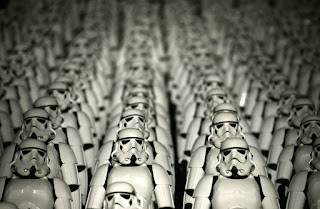 Above, space sheep.
Artist Aaron McConnell has done a whole set of these. You can find more of them on his site: http://aamcconnell.com/2015/05/05/greek-star-wars/ 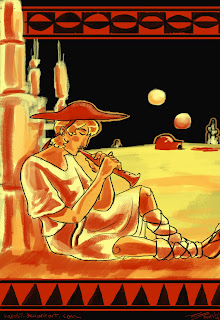 Above, Luke waits for adventure, by Ace Techne.

This sweet scene by Hapo (aka Ace Techne) also uses an illustrative style. We have a bit more shading and a sense of perspective that we wouldn’t expect on a vase, but on the other hand, we also have the unmistakable take on the reddy-orange and black colour scheme, and a Greek-key-like frame around the scene. Hapo has steered clear of the combat-scenes and opted for the pastoral scene of the young farm boy biding his time waiting for adventure. What’s that? You wanted to go to Tosche Station to pick up some power converters? Too bad, Luke, too bad. 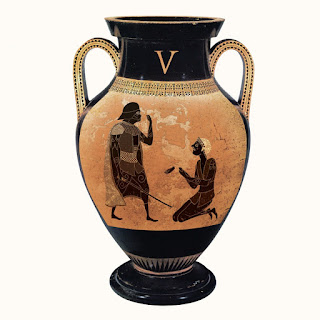 Above, Vader vs Luke, by Antium. 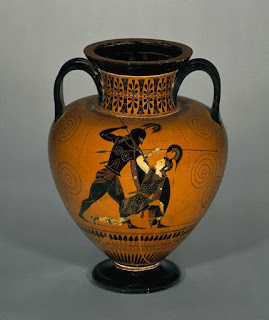 This is our last example, a splendid piece of work by Antium, depicting the moment that Vader cuts off Luke’s hand. Antium has gone explicit with the vase theme by placing the scene on a vase background. The image is also explicit about where in the Star Wars saga this comes from, with the V for Episode V (The Empire Strikes Back) on the neck. The attention to detail in the figures’ armour and clothing is marvellous, and very in-keeping with the style of Exekias, the master vase-painter who has been imitated. The dynamic of raised victor, lower loser has also been replicated, as we can see by comparison with Exekias’ Achilles-Penthesilea. So too has the eye contact. Achilles-Penthesilea lock eyes in a slightly creepy erotic dying scene, while Luke looks reproachfully at Vader, perhaps finding it difficult at that moment to see the good in him.

You’ve seen a few examples. What scene would you re-work? 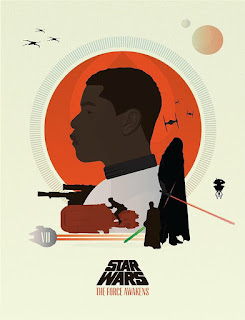 An update to include this actual real Star Wars tea-pot, made for Mai Musie, Classics Outreach Officer at the University of Oxford. Thanks for sharing Mai!:

A friend made this for me a while back combing my love of Greeks & @starwars @SonyaNevin @emmabridges pic.twitter.com/VbfYsEwmrA

Posted by Sonya Nevin and Steve Simons at 16:57