Good news! Panoply’s Sonya Nevin has a new book out: The Idea of Marathon: Battle and Culture . Published by Bloomsbury, it’s a rip-roaring ride through 3000 years of history. In this post we’ll be talking to Sonya about the book, including where ancient vases fit into all this. Sonya also had the pleasure of talking to podcaster Ancient History Hound recently, so you’ll find a link to their podcast chat here too. 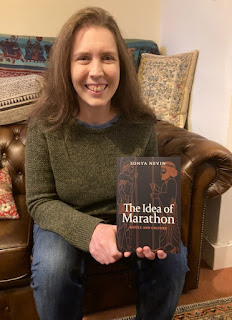 1) What’s the book about?
The Battle of Marathon has had a huge impact on culture ever since it happened. The Idea of Marathon introduces all the players and gives you the build up to the battle. We get the battle itself – what kinds of weapons are being used, what kind of wounds do people get, what we can and can’t know about an ancient battle. We get the fall-out – how ancient armies deal with the wounded and the dead. While a battle takes place over a short time, the fall-out is forever – so the second half of the battle takes a look at how the battle quickly began to influence politics, art, education and all sorts. It then follows that thread, and look at how and why Marathon remained significant for all the generations that followed – from ancient Greeks looking back at their past, to other ancient peoples comparing their own conflicts to Marathon, and then the way that it remains relevant post-antiquity – still influencing art, education, rhetoric, and shaping how people talk about struggles, whether you’re in the Renaissance, the wars of the 18th century, or you’re running a marathon in the 21st century. In a way it’s a big story, but I’ve also kept a human quality to it – we see what the battle means to some of the people who participate and their families. So we get to know the commanders of the Persian force – Artaphernes and Datis the Mede, and we follow what Marathon means to the Athenian Miltiades and his children Cimon the general, Elpinice, and Metiochus – a Greek who lived his life as a Persian. They’re a fascinating bunch who lived through a fascinating era. 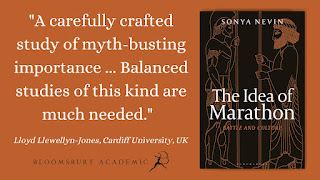 2) Did anything surprise you while you were researching it?
The Greco-Persian Wars are something I’ve been interested in for many years, so it was a pleasure to get so stuck into them. Surprise-wise – this was the first time I had read much about the importance of spells in relation to healing wounds – that was interesting. I had always known about Metiochus, Miltiades son, going off to lead a Persian life, but I was surprised to find out more about how he and Miltiades became the protagonists an ancient novel, and from there persisted in Persian poetry. There’s a section in the book called The Colonels and the Shah, which looks at the ancient past under regimes in 20th century Greece and Iran. The stuff about the last Shah of Persia and how he tried to make use of the ancient past – that’s a wild ride.

3) How did ancient pottery contribute?
Ancient pottery is often a great compliment to literature and to other material culture. We can see through pottery, for example, that the ancient Greeks took an interest in what was happening in Persia. The earliest surviving vase depicting a satrap or perhaps the Great King was made in around 520BCE – it shows attention to detail regarding the clothing specific to an elite figure of that culture.

There’s also attention to detail regarding the Scythians – a nomadic people who lived to the north east of Greece. A ceramic plate survives that actually names Miltiades. It’s a ‘kalos vase’, so there’s an inscription on that says ‘Miltiades kalos’ – ‘Miltiades is beautiful’. It depicts a Scythian, probably because Miltiades was going to an area where the Scythians often were. So the plate shows the Athenian interest in other cultures and there’s a sensitivity to the Scythians’ distinctive wearing of trousers, their use of the bow and of horse equipage. 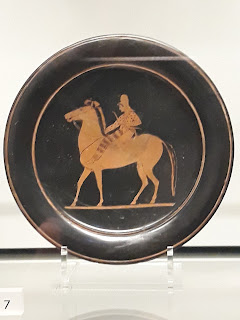 Pottery also shows us how Greek attitudes towards the Persians changes over time. From scenes of Greeks versus Persians fighting as equals, depictions of them begin to be less respectful, there is less sense of them as an equal, formidable foe. On the other hand, we see the persistence of interest in the era of the Greco-Persian Wars. We had an adventure to Italy just before the pandemic took off in Britain, and in the fabulous Archaeological Museum in Naples we saw the famous Darius Vase. That was made around c.340-330BCE, yet it depicts a play which features Darius, the Great King of Persia. 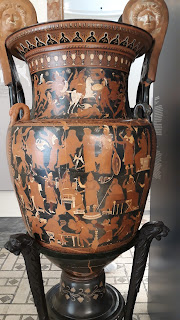 4) What are you working on now?
Oh, there’s always plenty going on. On the Panoply front, we’re making two new mini-documentaries to accompany the Dionysus and Iris Rainbow Goddess animations. These join the About Sappho 44 and About Heracles and the Erymanthian Boar documentaries which you can fin don the Panoply website. I also have a year-long post as an Assistant Professor at the University of Warsaw. That’s enabling me to put together a volume of activity and lesson plans that go with the Our Mythical Childhood animations. There are contributions from teachers at the top of their game all over the world, so I think it will be a really useful and fun collection. There will also be a chapter of mine about the Panoply vase animations in a collected volume edited by Anastasia Bakogianni and Luis Unceta Gómez; Classical Reception, State of the Discipline and New Directions will be a great read, so it’s exciting to be part of that.

5) Who’s your favourite ancient Greek?
When I did a Panoply interview for my first book, Military Leaders and Sacred Space, I gave Miltiades as my favourite ancient Greek. That’s still my answer. Maybe he’s not entirely a good man, but he is a great man, and his life is such an adventure – I love that kind of thing in ancient history. I’m also tempted to give a second answer, which would be quite different – Plutarch. We can know more of Plutarch's mind than we do of Miltiades, as we can read so much of his work. He was a wise man and I’ve learned a lot from him in all sorts of ways; he’s been a very positive influence on my life and I’m very grateful for that. Still, Miltiades for the win – what a life!

You’ll find The Idea of Marathon on the Bloomsbury website here and in all good bookshops. To check out Sonya’s Marathon chat with the Ancient History Hound, take yourself to: https://ancientblogger.libsyn.com/the-idea-of-marathon-with-dr-sonya-nevin 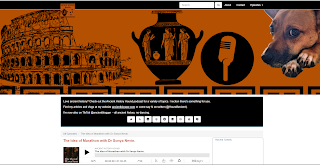 Posted by Sonya Nevin and Steve Simons at 16:12 1 comment: