Friends of Panoply will know that we are big fans of ancient warfare, so imagine how pleased we are that Panoply animation Hoplites! Greeks at War is featuring in a brand new ancient warfare exhibition at the National Museum in Warsaw! 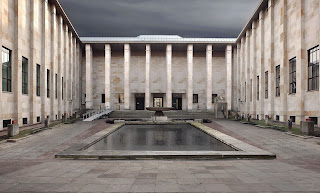 Above, the impressive National Museum in Warsaw

‘Hoplites. On the Art of War of Ancient Greece,’ opened this month and will run until the end of December. Its curator is Dr Alfred Twardecki, Curator in Chief of the Collection of Ancient and East Christian Art. The exhibition features a fabulous collection of ancient artefacts, including a rare hoplite shield with an intact surface and interior fittings, a selection of wonderful helmets, and red and black figure vases showing scenes of ancient warfare. 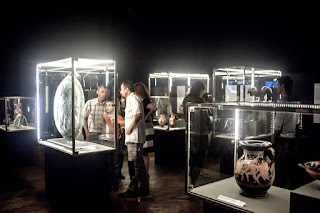 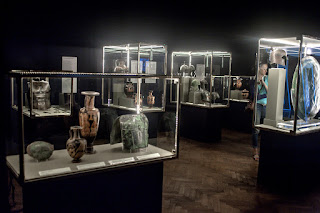 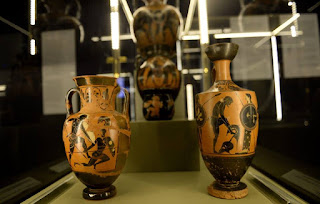 Above, exhibits in the 'Hoplites' exhibition

Hoplites! Greeks at War has been included in the exhibition to provide a visual impression of hoplite warfare and to offer a creative slant on vases and iconography. The animation is on display in the exhibition gallery and received a warm response at the opening reception. 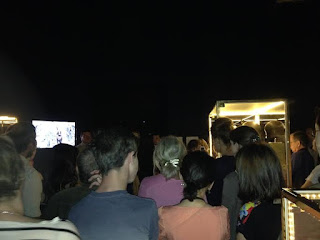 Above, ancient warfare enthusiasts crowd to watch Hoplites! at the exhibition opening.

In an exciting innovation, Hoplites! is on display with new audio. Dr Twardecki and a small team of students recorded a new sound-track based on the war poetry of the Spartan poet, Tyrtaios. Visitors to the exhibition can hear fragments 10 and 11 of Tyrtaios’ poetry sung in the original ancient Greek. I have included an English translation from fragment 11 below so that you can see just how appropriate it is for a warfare exhibition. It also provides a good example of what a confusing place the archaic Greek battle-field could be, with missiles flying this way and that as well as spears and swords taking a swipe:

You know those who dare to go into close-range
and press toward engagement at the front
die in less numbers, with ranks behind them
protected; those who run, lose all esteem.
The list is endless of the ills that hurt
the man who learns to think the coward’s thoughts…
Plant foot by enemy’s foot, press shield on shield,
Thrust helm at helm, and tangle plume with plume,
Opposing breast to breast: that’s how to fight,
With the long spear or sword-grip in your hand.
You light-armed men, wherever you can aim
from the shield-cover, pelt them with great rocks
and hurl at them your smooth-shaved javelins,
helping the armoured troops with close support.
Tyrtaeus 11 (Greek, 7th century BCE)

We hope that this will be the first step in a long and productive collaboration between Panoply and the National Museum in Warsaw. We are part of the team established by Prof. Katarzyna Marciniak of the University of Warsaw for a project called 'Our Mythical Childhood... The Reception of Classical Antiquity in Children’s and Young Adults’ Culture in Response to Regional and Global Challenges'. If the project is funded, Panoply will make a series of vase animations from the NMW's fabulous collection of ancient vases, showing how mythical creatures filled the imaginations of the ancient Greeks and how they continue to inspire art and education today. The animations would be available to visitors to the museum to watch alongside the vases they are made from and they would be posted on the Panoply site for free world-wide access. Wish us luck with the application!

The National Museum in Warsaw is open from Tuesday-Sunday. You can find out more about its exhibitions and permanent collection through its website at: http://www.mnw.art.pl/en/, and there is more on 'Hoplites. The Art of War of Ancient Greece' on the exhibition webpage. Photos courtesy of The National Museum in Warsaw.
Posted by Sonya Nevin and Steve Simons at 16:26 No comments: