Vases on Stage: A Panoply Interview with Dr Rosie Wyles.

We're delighted to be talking today to Dr Rosie Wyles, lecturer in classical history and literature at the University of Kent. Rosie is an ancient theatre specialist, working on Greek and Roman performance arts, costume, reception within antiquity and beyond it, and gender. Her doctoral research was on the role of costume in performances of Euripides’ 'Telephus', 'Heracles and 'Andromeda' in antiquity. Her publications include Costume in Greek Tragedy (2011), the highly acclaimed Women Classical Scholars: Unsealing the Fountain from the Renaissance to the Twentieth Century (2016), edited with Prof Edith Hall, and the vase-tastic 2010 volume: The Pronomos Vase and its Context, edited with Prof Oliver Taplin.

I heard Rosie's presentation on her latest research at the Classical Association Annual Conference earlier this year, and I knew that you Panoply readers would love it, with its marvellous combination of vases as objects and vases bearing images. So here it is: vases in ancient Greek theatre...

1) Were vases used as props in ancient Greek theatre?
Yes we have a number of plays which feature vases. For example, we have Electra in Sophocles' Electra holding an urn (which she has been led to believe contains the ashes of her dead brother) and lamenting over it. This becomes a particularly famous moment in the play thanks to the story about a fourth-century actor called Polus performing the scene using an urn which contained the ashes of his own son (recorded in Aulus Gellius Attic Nights 6.5.5-8). This first example demonstrates the urn prop being used for ashes, but vases or urns serving other purposes are also represented on stage. In Aeschylus' Oresteia (458 BCE), vases for pouring libations feature in the second play of the trilogy (Libation Bearers) and the water jars (hydriai) used as voting urns in the law courts are brought onto stage in the final play (Eumenides). By contrast, Euripides uses a water jar (hydria) in his Electra as simply a vessel for drawing water from a well.

2) So people were seeing objects from their own lives on stage for the first time. What affect do you think that had on people?
In the case of the Eumenides, this is our first fully extant play to use voting urns as props within its action. The effect would, I think, have been particularly powerful given the importance of legal procedures to Athenian civic identity. As symbolic representatives of the law court experience in Athens voting urns are 'charged' objects, which offers an added dimension to their meaning as props on the tragic stage. As contemporary objects within the mythological action of the drama, they would have invited a direct comparison between the experience of real life in Athens and the story being presented on stage. Within the context of the Eumenides, these props represent order (in contrast to divine dispute) and so assert the superiority of the Athenian approach to governance.

3) What can we learn about ancient Greek voting from the voting scenes on vases?
There are surprisingly few Attic vase paintings which depict voting. A series of eight cups dating to between 490-470 BCE show Athena presiding over a vote to decide which warrior should receive the arms of Achilles. The vote however is not an exact equivalent of Athenian practice as it involves warriors placing a pebble at either one end or the other of a platform in front of Athena. A much closer representation of contemporary practice is offered by a cup attributed to the Stieglitz painter and dated to 470-460 BCE (Musée des Beaux Arts, Dijon, CA 1301). On the exterior of the cup are two scenes of men voting (using the method of dropping the mussel shell into one of two urns - one urn to represent guilty and one not guilty). There are also seated men on both sides of the cup who oversee the action or are in conversation with each other. It is striking that on side B of the cup there seems to be an underage (because beardless) voter and a dispute which offers a parallel to the scenes on the earlier series of cups which also depict conflict on one side. The Stieglitz painter's cup acknowledges that voting can be contentious but at the same time the 'dispute' on this cup is far more civilised than the earlier mythological example (in which swords are drawn) and so it celebrates this aspect of Athenian governance. 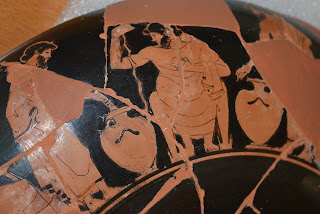 4) What vases scenes are there of vases being used in theatre?
The scene of Electra lamenting by the tomb of Agamemnon with a libation urn beside her becomes popular in ancient art. One of the challenges, however, is to determine when these representations can be confidently associated with a particular performance or production, or whether they represent a more general response to the dramatic rendering of the myth, generating an iconographic tradition independent of the theatre. 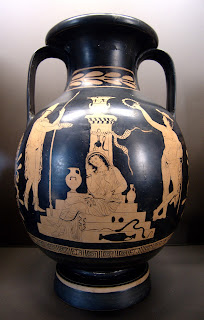 5) Would you tell us a bit more about how you, as a theatre historian, use vase scenes as evidence for other aspects of staging and putting on plays in classical Greece?
The body of 5th-century iconographic evidence for performance is quite limited. There are far more representations from 4th-century South Italy (or 'Western Greece' as Oliver Taplin in his major study Pots and Plays calls it), although the time lag, evolving performance history, and potential of local influences have to be taken into account for these. The fifth-century evidence, even if quite scant, can be really enlightening. A great example of this is the Pronomos vase (now in Naples and dated to just on the cusp between the 5th and 4th century) which is so rich as a piece of evidence that an entire conference and then book could be dedicated to its study! Since it depicts a cast in an off-stage setting after the end of the performance, one of the major insights which it offers is into perceptions of theatre as a cultural institution and attitudes towards performance. It is also of course useful for seeing what the costumes (no material remains of which survive) looked like. On the other hand, vases such as the Stieglitz painter cup can be used in a different way: since it is earlier than the Oresteia it offers an example of an alternative artistic response to the cultural institution of voting and informs us of current strands in the discourse on law courts which Aeschylus then exploits. The iconographic record in general gives us a unique and valuable view into the visual landscape of the theatre audience which is essential to an analysis of their responses to the visual dimension of performances. 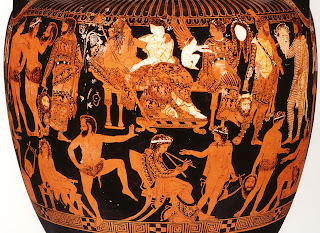 Above, the celebrated Pronomos Vase depicts a theatre cast after a performance, Naples Archaeological Museum, 81673

6) Who's your favourite ancient Greek?
It used to be Euripides because of the wonderful way in which he manipulated costume is his plays both to create powerful dramatic moments and also to comment on other playwrights. More recently, however, I've been researching Aristophanes and find his ability to produce brilliantly farcical scenes which at the same time are packed with sophisticated and incisive commentary really impressive. So at the moment it's a tie between the two!

Many thanks to Dr Wyles for sharing these insights on a fabulous topic! If you'd like to find out more about Electra on stage, you will enjoy reading Electra Ancient and Modern – A Panoply Interview with Dr Anastasia Bakogianni. To those of you on Twitter, you can follow Dr Wyles at @RosieWyles for highly recommended updates on her research and other interesting classics news.
Posted by Sonya Nevin and Steve Simons at 17:13 No comments: