On Symposiums and Vases - an Interview with Professor Sir John Boardman. 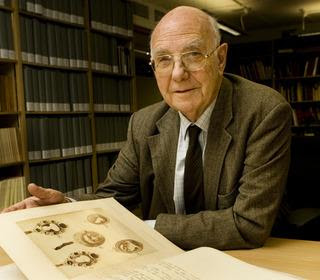 It's not long now until the release of a brand new vase animation. The animation is being made for Oxford University’s Classics Faculty and Ashmolean Museum, so, in anticipatory celebration, we're talking today to one of Oxford’s leading lights, Prof. Sir John Boardman, Senior Research Associate at the Classical Art Research Centre and Emeritus Lincoln Professor of Classical Archaeology and Art. Sir John is the author of four indispensable handbooks on Greek vase painting, as well as numerous other works including The History of Greek Vases: Potters, Painters and Pictures (2008) and The World of Ancient Art (2006). He has served as the Assistant Director of the British School at Athens (a wonderful archaeological institute in Greece) and as Assistant Keeper of Antiquities at the Ashmolean. Today he’s sharing thoughts on vases, symposiums, and gems...

1) You have worked with so many vases throughout your career; is there one in the Ashmolean collection that you find particularly interesting?
Yes. In my first days in the Ashmolean I came across fragments of an East Greek black figure vase which I could restore as showing the carriage of the boat of Dionysos. The vase was from Karnak in Egypt where there were similar processions, inspiration for the Dionysiac. I retained an interest and it formed a key element in my short book on The Triumph of Dionysos in 2014.

2) The vase in the new animation depicts a symposium scene of men drinking and playing music together. What values were being expressed through scenes of this sort?
The symposion was an important social event in Greek life – the wine was well watered! Many houses had rooms especially furnished for a symposion although I suspect that most Greek homes were not so well furnished. 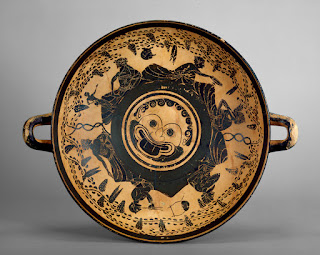 Above, the vase that will feature in Panopy’s next animation, out soon. An Athenian black-figure footed cup (kylix) (AN1974.344), c.500 BCE. Image © Ashmolean Museum, University of Oxford

3) Would a vase of this sort have been a high status item?
This example was almost certainly an export model, sent to Italy, possibly for the Greek market but just as probably for the Etruscan where its message might not have been so clear.

4) The people in the symposium scene are depicted drinking from all sorts of shapes of cups. Did symposium culture encourage innovation in vase-making?
Drinking watered wine was an important event for Greeks and the potters were especially ingenious in creating new shapes for the drinking cup, whether practical or not, and often after foreign models.

5) Much of your recent work has looked at carved gem stones. Is there any overlap between the art we see on vases and that on carved gems?
The gem stones were a more personal matter and their subjects could be inspired by various different factors – religion, the name of the owner, or simply display. The idiom and overall style was uniform in the arts of classical Greece so it's a matter of parallels rather than any more positive links, I think. 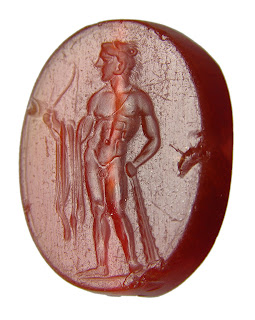 6) Who’s your favourite ancient Greek?
It has to be Heracles, for the variety of his adventures and his role in both mythology and the everyday religion of the Greeks.

Above, the hero himself - Heracles wrestles a water god in Panoply's animation of a tiny amphora from the Ure Museum.

Many thanks to Professor Sir John Boardman for talking to us today. If you’d like to hear more, you’ll enjoy the short video below exploring what can be deduced from an ancient Athenian symposium cup, and the podcast below that, which discusses the discipline of Art History.

Above, Treasures of Oxford - Athenian Wine Drinking Cup. Sir John Boardman talks about a wine drinking cup made in Ancient Athens - what we can learn from it about Ancient Greek culture and the kind of lifestyle the Greeks had.

Above, Introduction to Art of the Ancient World. Prof Donna Kurtz and Prof Sir John Boardman talk about Sir John's life, career, and experiences as a classical scholar, and the relationships between the artworks of different ancient cultures.

Posted by Sonya Nevin and Steve Simons at 10:52 1 comment: