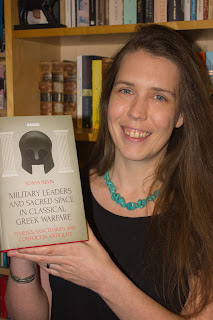 We're delighted to be celebrating the recent publication of Sonya's book: Military Leaders and Sacred Space in Classical Greek Warfare: Temples, Sanctuaries, and Conflict in Antiquity. Sonya completed her doctorate at University College Dublin before going on to work at the University of Roehampton in London. She is the author of several publications, including 'Negative Comparison: Agamemnon and Alexander in Plutarch's Agesilaus-Pompey', GRBS 54, and 'The Spectacle of War in the Panoply Vase Animations'. Usually Sonya writes our news updates and asks the questions in the Panoply interviews, but today we've turned things on their head to ask Sonya about military leaders, sacred space, and how this book came to be written...


1) What's the book about?
When ancient Greeks went to war, sooner or later they would encounter sacred sites – such as sacred groves, hero shrines, or full-on sanctuaries with temples and valuable offerings. This book is about how ancient Greeks behaved in those situations, and why. The ideas in it mostly come from looking at the sorts of stories that ancient Greeks told about their wars, and the roles that encounters with sacred places played in those stories. To some extent, human societies are defined by how they fight their wars, or rather, by the stories that are told of those wars. Looking at how the ancient Greeks' talked about war is the best way to understand the values that underpinned what happened in their real lives; the values in the stories and the rhythms and motifs with which they're told are very revealing. So the book features some pretty shocking behaviour within an overall pattern of restraint. There's a realisation amongst ancient writers that those episodes of a war that get reported define how most people think about that conflict. Who said what to the priest? Were offerings made; when and by whom? When was the statue taken? broken? – these things make or break the long-term image of generals and their campaigns. There are fantastic stories about the Greeks at war, featuring some of Greece's most famous (or infamous) military leaders: King Cleomenes crushing Argos; the Argives' crushing of their neighbours; sanctuaries in the Persian Wars; doomed Nicias and the Sicilian Expedition; the magnificent Brasidas and his diplomacy in the Peloponnesian War ("not bad for a Spartan", said Thucydides), and Agesilaus of Sparta and his many adventures annoying people all over the Greek world. There's also a whole chapter on the struggles for control of the panhellenic sanctuaries – Olympia, Delphi, Nemea and Isthmia. 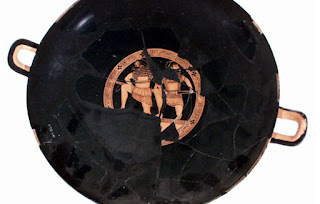 2) Have you included any vases?
Oh yes. While Military Leaders and Sacred Space is very much focused on written accounts of history, vase scenes offer a valuable addition. They provide insights into the sorts of things that ancient Greeks could conceive of as happening in conflicts, and of the sorts of images they were happy to have around them. One issue that I explore is what people thought about having sacred places near the battles they fought. Sometimes the presence of the sanctuary was regarded as very encouraging – even for people in enemy territory. Historians frequently describe people praying to the gods and heroes of those sites to come and help; they tell stories of how those gods did come... and of how sometimes they didn't. Heroes seem to have been considered more likely to help, largely because they were closer to human affairs having once been mortal themselves. The wonderful vase above depicts heroes climbing out of their tomb. Their alert postures and readiness with their swords suggests that they're about to join a battle, and it's probably a depiction of heroes coming to join the battle of Marathon. This is a fantastic addition to the written accounts of the battle and descriptions of long gone, large-scale commemorative artwork. The artist has captured the heroes taking notice and leaping into action. This scene reinforces evidence for the belief in heroes' interest in mortals' battles and, as such, it's further evidence that the proximity of hero shrines to battlefields was held to have significance. 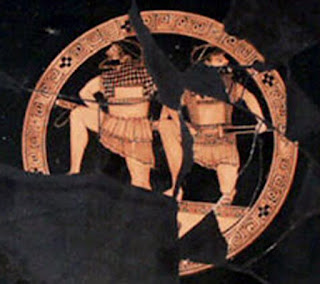 3) Do mythical vase scenes help? What ones have you drawn on?
Yes, they do. It's not always easy to distinguish scenes indicating myth from those that are meant to be more historical, but in cases where there is a clear motif or – even clearer – labels, you can be more confident. Scenes depicting the Trojan War are an interesting case in point. There was a story that the Greeks were told that they would never take Troy without first removing the Palladium – a statue of Pallas Athena – from the city. When they heard this, Diomedes and Odysseus crept into Troy and stole it. Scenes of this incident appear on quite a few vases, sometimes with Athena looking on approvingly. In Military Leaders and Sacred Space I've discussed the implications that this has for thinking about what happened to sacred statues during historical conflicts. 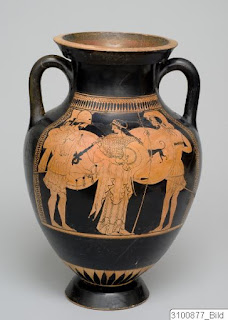 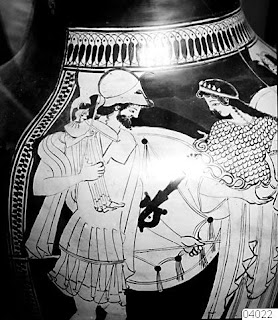 Above, Athena looks back at Diomedes, who is carrying her statue (amphora by the Tyszkiewicz Painter, Stockholm Medelhausmuseet , 1963.001). 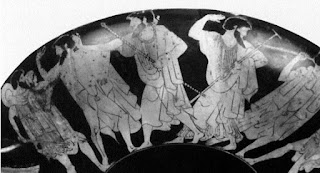 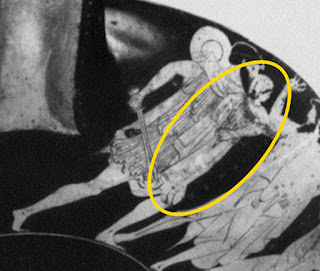 Tales of the sack of Troy also bring us some curious depictions of military conduct. Vase decorators seem to have felt comfortable depicting some of the horrors of war when they were set at Troy in a way that they tended not to for real, contemporary life. One example of this is the rape of Cassandra by Locrian Ajax (not Achilles' cousin, the other Ajax). Vase scenes depicting this event always place emphasis on Cassandra being pulled from the statue of Athena in the sanctuary where she served as priestess. To some extent the statue simply helps to identify the scene, but it also suggests that it was the sacred nature of the site from which Cassandra was pulled that made this act problematic – not the attack itself. This is borne out in the way that the poets tell this story too. It's a subtle yet significant distinction. There are also vase scenes of Achilles killing Troilus in the sanctuary of Apollo... it didn’t work out well for either of them. 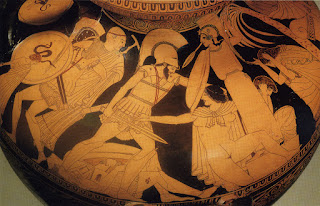 Above, Locrian Ajax attacks Cassandra in the sanctuary of Athena at Troy (hydria by the Kleophrades Painter, Naples, Museo Nazionale Archeologico). 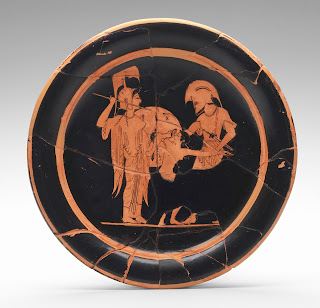 Above, Locrian Ajax makes his attack, here with Cassandra depicted as a girl, in contrast to the adult-sized Ajax and statue of Athena (plate, Yale University, 169).

4) What got you interested in this topic?
I've been interested in the conduct of war for a long time. When I was small I was fascinated with Shakespeare's Henry V. During the siege of Harfleur, Henry tries to force the town to surrender by describing all the horrendous things that his soldiers will do to its citizens if they don't submit; he asks if they will surrender or "guilty in defence, be thus destroyed", essentially saying that they will be responsible for the terrible things that will happen to them. Later on in the play, he hangs someone for robbing a church and decrees that the army should behave itself as they march across France, "For when lenity and cruelty play for a kingdom, the gentler gamester is the soonest winner." The whole play is full of conflicting messages. I was intrigued by the way that the rhetoric shifts, and also by the fact that this is not an account of medieval warfare, but an Elizabethan thought experiment placed in a campaign fought almost 200 hundred years before. I remained fascinated by the extremes that war pushes people to and, when I became more interested in ancient Greek history, questions about how wars were conducted, how the people participating thought they should be conducted, and how the culture as a whole dealt with these issues and talked about their conflicts remained very significant for me. Herodotus, Thucydides, Xenophon - these historians and others were pioneers of the genre of history-writing and right from the start they were interested in moral themes and in reflecting thoughtfully on what happens to society and people's ethics during wars; I never tire of exploring their work. During my MA I studied Greek cult and wrote a thesis on the conflicting accounts of the Persian invasion of Egypt. That set me up to pursue a full project on Greek wars for my doctorate. This book is 50% revamped material from my doctoral thesis, combined with 50% new material. War will not be going away any time soon, so questions about how wars should be conducted and how the ways that they are reported and remembered influences society remain a vital part of human culture.

5) Who's your favourite ancient Greek?
Miltiades! Miltiades, son of Cimon, is best known for his leadership at the battle of Marathon. He had an outrageously exciting life prior to that too. He experienced Athens under the tyrants and the emergence of democracy; he was an exile and a tyrant himself; he fought for Persia and for the Greeks; he was a hero and he died in disgrace. Realistically it's hard to be confident of very much about him personally, but he lived an adventurous life during a time of fabulous cultural richness and heady transitions, always in the thick of it, and I love him for that. I enjoyed writing about him in Military Leaders and Sacred Space; he was a controversial figure even in antiquity, so it was great to explore how different writers tried to cast him as good guy or bad guy. Military leaders always upset someone; stories about them doing terrible things in holy places are a sure way of knocking the shine off their image. 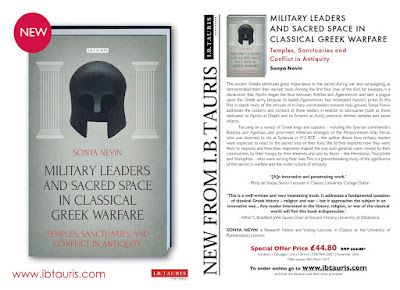 Military Leaders and Sacred Space in Classical Greek Warfare can be ordered here, on the IB Tauris website and in all good bookshops and libraries near you.

Posted by Sonya Nevin and Steve Simons at 19:45 No comments: