Adventures in Switzerland and London: Games and Comic Books 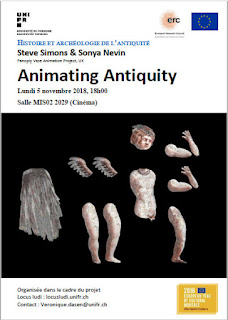 Games and Comics – this post celebrates the fun stuff! Time to fill you in on some recent Panoply adventures. We are not long back from a visit to Switzerland where vase lovers and other scholars had gathered for Good or Bad Games a conference on play that's part of the wider project Locus Ludi: Play and Games in the Cultural Fabric of Classical Antiquity an ERC-backed project exploring the world of games in the classical antiquity (on Twitter at @Locus_Ludi). Locus Ludi is run by Professor Veronique Dasen, a scholar well-known in vase-loving circles and one who has featured on this bog before via her fascinating interview on magic . At the Panoply Vase Animation Project we're busy working on some animations of gaming scenes for Locus Ludi (as well as continuing our work on Our Mythical Childhood ) so it was a great pleasure to explore the project in greater detail and to show off a little of what we've been doing.

Games were played throughout antiquity, by children and adults, for education and recreation, with good outcomes and bad. Good or Bad Games brought together scholars from a range of disciplines to think about play and games – what roles they had in antiquity and now. 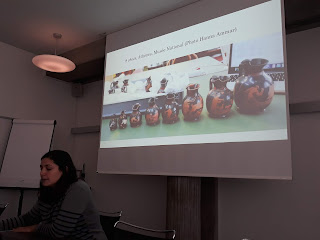 Above, Hanna Ammar gets to grips with scenes of play on pottery.

Hanna Ammar (Fribourg) examined images of children playing found on ancient Greek vases. These pots present a variety of play, including young children with rattles, rollers, balls, and animals, and older children playing knucklebone games and piggy-back games. Silvana Dayan (Fribourg) spoke about images of mythical childhood, drawing on her doctoral project on the relationship between grandparents and grandchildren in classical antiquity. She discussed the idea that future mythical heroes are rarely depicted doing normal childhood things (like playing), as they are already being represented with regard to their adult persona. An unusual exception to this trend (which can just about be seen in the photo below) is a sensitive image of Perseus as a child, holding out a ball as he is shut into a box by his grandfather (not a recommended form of grandparent-grandchild interaction!). 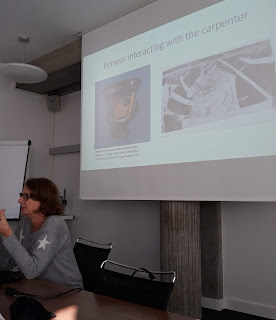 Above, Silvana Dayan on a rare scene featuring the young Perseus with a ball, from an Athenian calix-krater, St. Petersburg Hermitage Museum, 637.

There was also talk of applied gaming in the modern world. Francesca Berti (Tuebingen) advocated the use of traditional toys and games in schools to boost development and to bridge cross-generational/cross-cultural boundaries. Traditional toys, such as spinning tops, blocks, cup-and-ball, skittles have a haptic quality that is perfect for people who are learning to understand the physical world; encouraging children to ask adults they trust, "did you ever make a toy?" is a great route into shared play and conversation. The touchable, haptic elements of play were also stressed in Thierry Collaud's (Fribourg) presentation on play therapy for those with Alzheimer's disease. While computer games (including VR) have growing use and benefits in the care and entertainment of the elderly, those living with Alzheimer's benefit rather from play based on touch – such as building blocks, pick-up-sticks, and percussion instruments. This form of play helps them with the challenge of maintaining a sense of the difference between what is in their heads and what is happening in the physical world beyond. Play is good for all of us, but some forms suit some situations better than others. 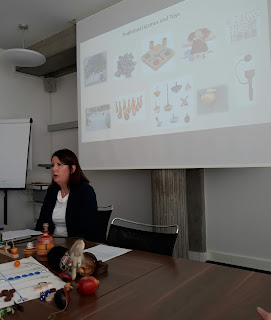 Above, Francesca Berti makes a case for the particular strengths of traditional toys.

Our contribution to Locus Ludi is to create animations of ancient scenes depicting play. They will be informed by Professor Dasen's research into play and games, with the animations demonstrating how games were played and drawing out some of their wider social significances. The first piece we're creating is an exciting departure from our normal adventures with vases – we are animating a Roman fresco! The fresco comes from the House of the Deer in Herculaneum. It depicts three erotes (winged children) playing a hide-and-seek style game. The animation will show them playing the different forms of this game described by Roman author Pollux: Myinda, a sort of Blind Man's Buff; Apodiraskinda, a game with many names in English (such as PomPom 40, FortyForty, and 1,2,3, In!) in which players hide and then return to a base; and Chalke Muia, a chasing game where players pursue the odd one out with strips of papyrus. You'll be able to watch all three of these games being played as the fresco moves and decide which one you think fits best. The other animations that we'll make for Locus Ludi will be made from Greek vases, and naturally the presentation also included discussion of the creative activities that can be done with vases and vase animations. You can see videos of many of the Good or Bad Games talks on Locus Ludi's YouTube channel . We'll keep you posted on our progress on the project and, until then, a big Thank-You to Professor Dasen and her team at the University of Fribourg for a warm welcome and an interesting time. 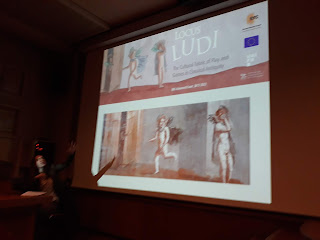 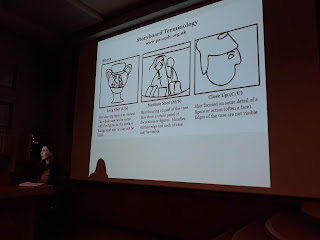 Above, Sonya in Fribourg talking about the fresco Panoply are animating, and the creative things you can do with artefacts.

I would also like to give a big shout out to the organisers of Drawing on the Past. The Pre-Modern World in Comics (Drs Leen van Broeck ( @leenvanbroek), Zena Kamash, and Katy Soar). This two-day conference in London looked at the many and varied ways in which the pre-modern world is represented in comics and graphic novels. There was fascinating stuff on the Silver Surfer and the Odyssey from Christopher Bishop, Glynnis Fawkes discussed her work adapting the The Homeric Hymns into graphic novels, and my personal favourite was David Anderson's “The Aliens from 2,000 B.C.!” – Or, How Comic Books Have Paved the Way for Pseudoarchaeology". There was a fantastic practical workshop element to the conference too. Zofia Guertin, Kristin Donner and Laura K. Harrison, Karen Pierce, and John Swogger described their work interpreting archaeological excavations in comic form, with Drs Pierce and Swogger helping us to get creative and give drawing a go. My presentation introduced the Our Mythical Childhood survey database, which is an excellent resource for exploring the way antiquity is represented in comics, graphic novels, and illustrated works. I even made this lovely poster as an example – it's based on my database entry for the graphic novel Marathon. Short videos of the talks are available on the conference website: https://drawingonthepast.wordpress.com/digital-archive/ and highly recommended. 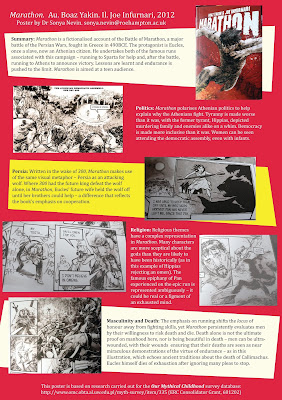 Above, Sonya's Drawing on the Past poster, based on her entry in the Our Mythical Childhood database of antiquity in children's culture (which you can read here: http://www.omc.obta.al.uw.edu.pl/myth-survey/item/335 ).

Above, Minimus considers the Battle of Marathon! Minimus author Helen Forte was at Drawing on the Past and created unique Minimus pics of each talk - you can see all of them through the link to the conference videos above. 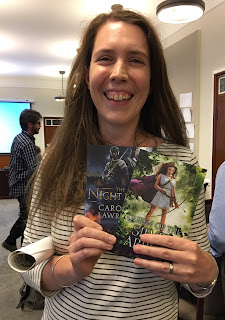 Above, Sonya weighs up some happy book choices from Caroline Lawrence, supercool author of fiction set in antiquity, who joined in at the conference. 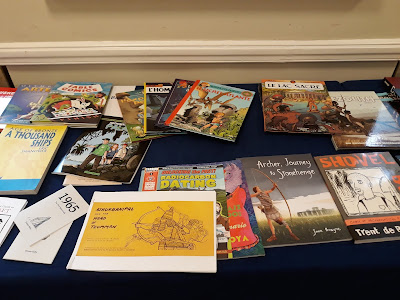 What's your favourite comic featuring antiquity?
Posted by Sonya Nevin and Steve Simons at 17:36 No comments: