Magic and Play. A Panoply Interview with Véronique Dasen

Welcome to the start of a new academic year :) You have two new Panoply vase animations to look forward to, which will be out later this month and next.

Today we’re talking to Professor Véronique Dasen, Associate Professor of Classical Archaeology at the University of Fribourg in Switzerland. Prof. Dasen talks to us about her work on magic and amulets and about her exhibition, Veni, vidi, ludique (Came, Saw, Playful) to which Panoply contributed Clash of the Dicers. 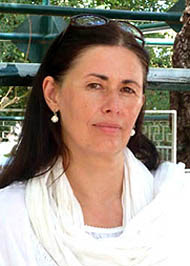 1) Veni, vidi, ludique has been a magnificent undertaking, exhibiting in three Swiss museums across two years. What is the main aim of the exhibition?
Veni, vidi, ludique is an Agora project, supported by the National Swiss Foundation. Its aim is to promote the communication of scientific research to a wide audience. Veni, vidi, ludique shares the results of the latest research on games and toys in antiquity. Ludic practices (that is, activities to do with play) present important material and intangible cultural heritage that has long been neglected. Games and toys provide a wealth of information on stereotypes of gendered roles (such as dolls for girls, carts for boys), religion (toys and rites of passage; games and divination), adult/child relationship, educational principles, and more generally models of socialisation and transmission of cultural values. In an anthropological perspective, they engage wider reflections on our present society. 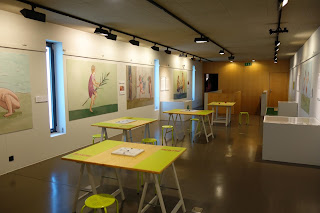 Above, the play area in the exhibition, 'Clash' plays in the cinema at the far end. 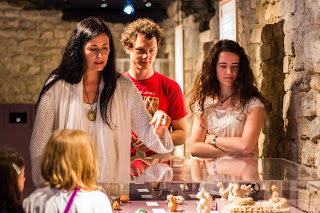 Above, Prof. Dasen discuses some of the artefacts with visiting young people.

2) The exhibition began in the Roman Museum of Nyon, moved to the Swiss Museum of Games in La Tour-de-Peilz, and is now at the Roman Museum of Vallon. Has being in different museums changed the way that the exhibition is displayed?
Each museum develops another aspect of the ancient sources and artefacts. The three museums share the same common title: Veni, vidi, ludique, and a common design, but each has a distinct subtitle according to its focus. The Musée romain of Nyon presented 'Le jeu de la vie', a general synthesis on the role of toys and games in the life cycle, from birth to adulthood. At la Tour-de-Peilz, Swiss Museum of Games, 'Jouer avec l’Antiquité' investigated the reception of Antiquity in modern games, from cards to videogames. At Vallon, Musée romain, 'Les jeux sont faits' reconstructs the games found during the excavation of the Roman villa, suggests rules, and invites the public to play and to test them. 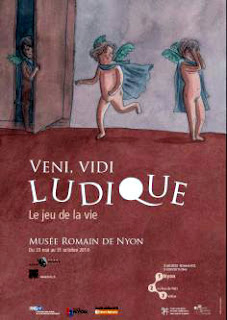 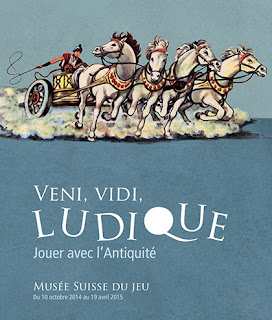 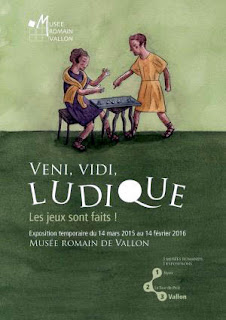 Above, posters for each of the different legs of the exhibition.

At each place, interactivity is promoted by events, such as 'Cafés scientifiques', and by new technologies, such as a smart-guide for mobile phones with QR codes providing extra information, Panoply’s Clash of the Dicers vase animation, and table touch animations that enable visitors to understand the rules of ancient games. We also created a series of short movies providing reconstructions of games that visitors enjoy because of the bonding it creates. On our website www.venividiludique.ch, and below, you can see how Penthelitha was played in Antiquity.

3) Clash of the Dicers is made from Exekias’ vase depicting Achilles and Ajax gaming. What can we learn from that vase about games and play in antiquity?
This famous vase is one of the earliest of a large series (around 160) produced during 50 years at Athens under the reign of the Peisistratid dynasty. The scene reflects archaic aristocratic ideology. The heroes are two friends, the best Greek warriors. I call it a metaphoric icon*, demonstrating their capacity to concentrate, and to develop strategies. The game, identified as pente grammai**, however, is played with a dice, showing that success or defeat does not only depend from the personal qualities of the heroes, but also from the will of the gods. 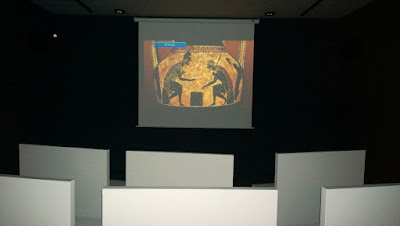 Above, Clash of the Dicers plays in a small cinema within the exhibition.

4) How have people responded to the animation?
Visitors of all ages enjoy the animation. It helps understanding how ancient imagery functions. The condensed image of Exekias is deconstructed in the movie revealing the different sequences that it concentrates. The vivid reactions of these legendary heroes, displaying their feelings, like modern players, make them familiar. However, the educational function of games was the opposite, to learn how to control your emotions! The lively music adds a humorous touch.

5) What other sorts of games and play can be found on ancient vases?
A large range of games are found on Greek vases, but not all. Vase-painters often focus on a specific age category, that of youths before marriage. An erotic tension is present, as ludic activities, such as ball games, allow the interaction of girls and boys. Some games are fascinating because they have disappeared today, such as ephedrismos, a type of “piggyback” game, always played between youths of the same sex because of the physical proximity it creates (see the special issue of Archeothema 31, 2013. Some games look familiar but their rules differ from today, such as the morra game, a hand game played holding a stick in ancient Greece. Its aim differs from the modern one that was traditionally played for money; Greek vases display a game of love and chance: a seducing girl is often opposed to a handsome boy, in the presence of Eros and Aphrodite. 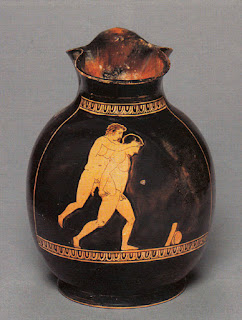 6) You recently published your research on magic and amulets in antiquity in The Materiality of Magic. Was magic a big part of life in ancient Greece?
Yes! Magic, as a response to the hazards of daily life, was omnipresent. The frontier between game and divination is very thin. For example, we know that in Asia Minor five knucklebones were used as dice to produce oracles. A series of Roman period inscriptions have kept the results of the throws (56 combinations). We created an App, that can be freely downloaded from App Store, where you roll 5 knucklebones and discover the fate that awaits you. As in Antiquity, the oracle can be kept, but today you send it to yourself as an email. A second try is possible if the first result is too bad!

From the eagle of Zeus
The eagle up in the air flying to the right, will give
a good omen to the traveller. With the help of Zeus, all mighty,
You can do the deed you are driven to do. Fear nothing!
(33111)

From Tyche holding the rudder
Do not hurry! Because it is not nice to go now! So wait!
If you rush in vain desire, you will hurt yourself very much.
Wait until the chance has come, and you will achieve everything.
(11163)

There are more activities online at http://www.venividiludique.ch/exposition/presentation

7) Who’s your favourite ancient Greek? A woman, of course. Researching magical gems let me discover the secret competences of Omphale, the Queen of Lydia, who enslaved Heracles. On gems, she demonstrates her hidden magical power. She takes the place of Heracles as the patron of women’s health, using his club to master threatening incubi, malevolent demons, in the form of a Sethian donkey, demonstrating that ancient women were in control of their body.


Many thanks to Prof. Dasen for sharing those insights. You can catch Veni, vidi, ludique at the Roman Museum of Vallon, Switzerland, until February 2016 and on its website www.venividiludique.ch. The exhibition has also started travelling further. On 16th September 2015, it will open in Bavay, France, at the Forum antique, Musée archéologique du Département du Nord. You can read more of Prof Dasen's work at: https://unifr.academia.edu/V%C3%A9roniqueDasen/Papers 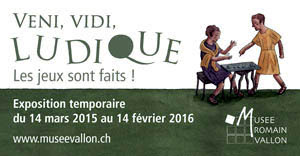 Posted by Sonya Nevin and Steve Simons at 20:04

Email ThisBlogThis!Share to TwitterShare to FacebookShare to Pinterest
Labels: Events and Exhibitions, Interviews