Antiquity-Camera-Action! An Interview with Teen Animator of Myth, Gabi Bania 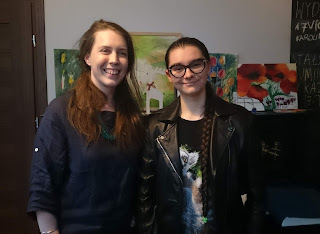 Earlier this year, Steve and I at Panoply had the pleasure of acting as jurors on the Our Mythical Childhood-led schools competition, Antiquity-Camera-Action! This was a national competition held across Poland in which teens (15-18) were challenged to create a video (4 mins or less) about classical myth. At the Panoply Vase Animation Project we appreciate animation, so we're delighted to bring you an exclusive interview with finalist, Gabi Bania, of Liceum Filmowe (Movie High School), whose impressive animation, Arachne. Not a Spider Story won 2nd place in the competition. Check out this beautiful mythical animation here. A new round of the competition has just opened – you'll find details at the end of the interview.


Above, 'Arachne. Not a Spider Story' by Gabi Bania

1) What did you want to communicate through this animation?
Firstly I wanted to show that Greek mythology consists of such brilliant stories that, even now, after thousands of years, we can find fresh valuable messages and revealing lessons in them. I hope that my movie will encourage other people to rediscover these well-known myths and see them as something more than cruel and unreal stories as they are often perceived.
Secondly I choose the Arachne myth because I consider this story to be unique and very different from others. And besides, the myth of Arachne is little known in Poland; the name 'Arachne' is mainly associated with arachnophobia or with pop culture, where this character functions as a simple, Halloween symbol of fear or disgust. However, the story of Arachne conveys deep values that can help young people to perceive the world in a different way. It's a great story which can be adapted to draw our attention to some of the most common and serious problems of today’s world, like hate and over-competitiveness. 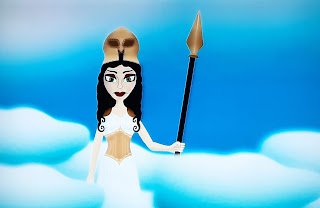 Above, Athena, from Gabi's 'Arachne. Not a Spider Story'.

2) Tell us a bit about how you made it.
When I got to know about the contest and chose the Arachne myth I started to think about the style of my movie. In the beginning I was considering stop motion animation, which I've worked with before, but then I decided to take up a challenge and create a 2D computer animation. I have always dreamt about making movies with this technique but had never done it before and actually the contest “Antiquity-Camera-Action!” motivated me to start this new adventure. Greek mythology, which is my passion, was also a great motivator towards creating the movie.
To create a movie in 2D computer animation for a beginner means spending hundreds of hours in front of the computer. Learning new programmes, drawing (all by my computer mouse), voice acting, music creating, editing and so on took me more than two months of devotion towards it – all in addition to my normal school work.
The thing that kept me on going was my deep love of Greek mythology and my desire to take a step in fulfilling my life's ambition to become a director of animated movies.

3) What do you like to read or watch to get your ancient world fix?
Over the years I've read many books on Greek and other mythologies, beginning with simple stories for children and going into more professional, more detailed texts about ancient life and beliefs. The one I like best is The Greek Myths by Robert Graves. He described everything in great detail.

4) Do you study any aspect of the ancient world at school?
Yes, I do. We study ancient culture and history during our school subjects such as: History of Art, Knowledge of Culture, and World History. We read many ancient texts during Polish language lessons too. As a student of a “Movie High School” I also had a basic course on writing plays and scripts according to ancient authors. Moreover I learn Latin language and rhetoric. 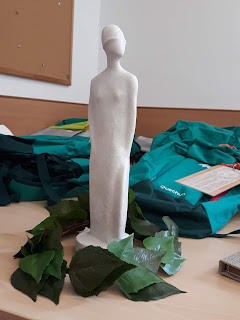 Above, the Athena prize presented at the University of Warsaw.

5) What do you think young people gain from finding out about classical antiquity?
Classical antiquity is one of the pillars of the Western culture and without it we wouldn’t be able to understand the time that we live in. In ancient stories we find not only the truth about ourselves but we also learn from other people’s experience on how to live.
Reading ancient texts enables us to notice connections between many aspects of culture, such as literature, art, music, theatre, cinema, etc. It helps us to see a bigger picture and to know the way to a source of constant inspiration.

6) Who's your favourite ancient Greek?
My favourite mythological character is the goddess Hekate, one of the most mysterious figures in the Greek mythology. She was considered to be the goddess of many things but especially of darkness, witches and magic. In ancient times, she was sometimes perceived to be a good and helpful character but as a creature of the Underworld she was also associated with evil powers, demons, and monsters.
She does not have her own myth, but she plays a positive role in a story of Demeter’s lost daughter. What is important about Hekate is that, unlike many other goddesses, she seems to be always just and wise.
Although Hekate is not a well-described character, everything that we know about her makes her really unique. I find this character very inspiring and I always look forward to finding her in other works of culture. For example we can meet her in William Shakespeare’s “Macbeth” (see esp. Act III. Scene 5).
Because her person is not defined in detail, we can wonder about her and make her an interesting character of a book or film. I am thinking of making Hekate a main character of one of my works one day.


Many thanks to Gabi to talking to us! And congratulations to her again on a great achievement in the competition. In breaking news, Gabi's latest film, "The Mystery of the Moonflower" has been nominated at the international festival, "Screen & Sound Fest 2018. Let's see the music!" in the Animation category. It features an original story with influences from Slavic mythology and Polish legends. You can see it (and vote for it!) here:
https://www.screenandsound.pl/voting/action/show/id/61

You may also enjoy other prize-winning entries to Antiquity-Camera-Action! 2018. Even if your Polish isn’t up to much, you can still follow what's going on:

If you or anyone you know is aged 15-19 in Poland, you'll be pleased to hear that entries for Antiquity-Camera-Action! 2019 are now open. Go to https://antykkameraakcja.wordpress.com/regulamin/ for details.
Posted by Sonya Nevin and Steve Simons at 14:35 No comments: