The first of eight new animations created for the Ure Discovery trail is now up on Panoply. The animation was storyboarded by pupils at Maiden Erlegh School in Reading, based on their interpretation of a classical Athenian vase. The info button by the animation gives all sorts of insights into the myth, the vase, and the process of creating the animation for the museum trail.

Hope you like the new look to the Panoply site. We’ve tried to make it clearer and easier to navigate – let us know what you think, and please help us keep improving the site by letting us know if you hit any glitches. By the way, we’ve also reloaded the pre-existing videos, so if you have any animation urls saved in PowerPoint presentations or hand-outs, switch them to the new urls.

The second Ure Discovery animation will appear next Wednesday, this time featuring the hero Heracles. 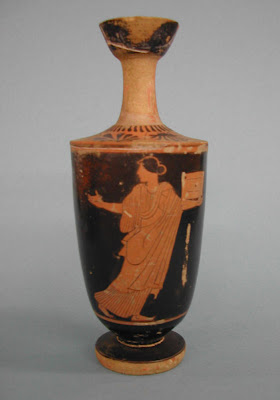 Posted by Sonya Nevin and Steve Simons at 17:56 No comments:

We’re delighted to say that the Ure Discovery Museum Trail was launched successfully today. Visitors to the Ure Museum at the University of Reading can now take the i-pad trail around the museum, seeing vase animations and other material right next to the vases they’re made from.

On Saturday night we attended a special launch event at the museum, where pupils involved in the project showed friends and family their artwork and saw the animations and trail for the first time. Curator Amy Smith welcomed us all and explained the background to the project – how the Arts Council supported the vision of teenagers curating their own responses to the collection. Annette Howard, of local chariot AACT (Access-ability Communications Technology), explained how the digital trail she’s created increases the accessibility of the collection. Steve discussed the animation process and explained some of the interpretative choices he made in transforming the teenagers’ storyboards into animations. And students and pupils who took part in the project told us all how much they’d enjoyed working with the collection and seeing the project come to fruition. Assistant Curator, Guja Bandini, who coordinated Ure Discovery, finished up the presentations by thanking all the participants and inviting everyone to enjoy a drink and look round the fabulous exhibition of project artwork.

A great night all round, soon to be followed by the animations appearing on Panoply in a weekly series starting later this week.

Posted by Sonya Nevin and Steve Simons at 18:58 No comments:

Only a matter of days until the Ure Discovery launch! Visitors to the Ure Museum will be able to enjoy the animated museum trail from Monday (17th). Panoply will be posting a new animation from the trail each week for eight weeks, complete with extra info on the myths and ideas in them. We’ll be kicking things off next week with an animation of the Pandora myth – don’t miss it!

Meanwhile, Sonya’s interview for Classics Confidential has gone live! Classics Confidential (http://classicsconfidential.co.uk) is an outstanding project which posts interviews with classicists from all over the world – it’s a great site for hearing about research from people who love what they’re doing. You can hear Sonya talking about Panoply and animation in museums here:

Posted by Sonya Nevin and Steve Simons at 18:27 No comments:

Not long now until the launch of the Ure Discovery project, featuring eight new vase animations framed within a museum trail. Building on the successful use of Stefan Hagel’s cithara music for the Ure View animations http://www.oeaw.ac.at/kal/agm/, Steve’s been sourcing more ancient music to match each animation.

Some of the tracks that will be used are by musician and music archaeologist Conrad Steinmann. Conrad collaborates with instrument maker Paul J. Reichlinn to reconstruct ancient Greek musical instruments. They base their reconstructions on ancient instruments that have survived over the centuries, and on vase images of instruments in use. Surviving Greek lyrics give indications of the rhythms used in ancient music; Conrad is guided by these rhythms in his musical compositions for the ancient-style instruments. You can find out more about his work at: www.melpomen.ch

Also appearing in the animations is music by Lyravlos, The Centre of Greek Musical Tradition http://www.lyravlos.gr, and by the London-based Thiasos Theatre Company www.thiasos.co.uk. Thiasos are a group of academics and theatre professionals whose mission is ‘to put music, dance, colour and spectacle back at the centre of Greek tragedy and comedy.’ The new animations can be followed without the music, but we hope you’ll enjoy the combination.

The Ure Discovery trail will be launched at the University of Reading’s Ure Museum on the 17th June 2013, complete with an exhibition of related artworks by the teenagers involved in the project. In case you can’t make it, Panoply will be displaying the animations along with further details on each piece in the resource pages. 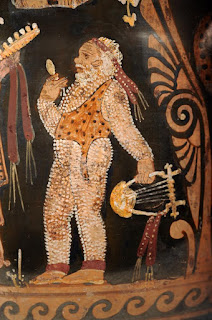 Posted by Sonya Nevin and Steve Simons at 19:37 No comments: