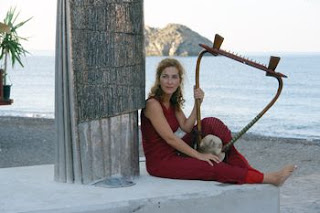 We're delighted to be talking to Aliki Markantonatou, an artist and music teacher based in Athens, in Greece. Aliki trained at the National Music Academy before specialising in ancient style music. We recently had the pleasure of working with her when she recorded Sappho Fragment 44 for the Our Mythical Childhood project. Aliki talks to us today about the lyre, ancient music, and cross-cultural collaboration...

1) What attracted you to ancient Greek music?
I studied piano and Western music, but I was feeling that I was missing something. Soon, I started listening to our traditional music and ethnic groups from all over the world. It was back in 2004 that I came across the lyre, and started experimenting and, a little later, playing my music on it. The need to use poetry arose and the ancient Greek poets, such as Sappho and Alkman offered me amazing lyrics of beauty. But the turning point was when I met Dr Chrestos Terzes and I realised that, yes, the ancient sound can be approached and reproduced. I was also lucky enough to attend three short seminars with Dr Stefan Hagel, and since then my interest in ancient Greek music became realistic, and not just wishful thinking. My mother is a passionate Classicist and the lullabies and fairy tales she was narrating to us were all fragments from Homer, Aesop, lyrical poetry and so on. I think that this was crucial for me to feel that antiquity is close to my heart. 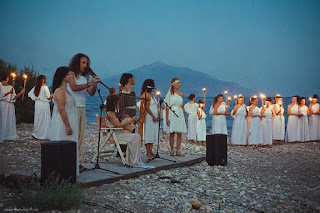 Above, Aliki and other musicians at a performance of the Orphic Hymn to Hera at the Heraia festival at the Pythagorion, Samos 2016.

2) You create many projects and collaborate with different musicians. Could you tell us how you work together with other musicians and what you do?
I feel very lucky to have met so many amazing musicians and personalities because of the lyre. I participate regularly with the Lyre ‘n’ Rhapsody female ensemble, and I've performed and recorded music with Turkish musicians, Chinese, Swiss and Indian among others. The way I view the lyre is that, besides ancient Greek music, it can exist in harmony with all kinds of traditional instruments and it can be integrated in modern soundscapes. What I usually do is to study the style of the musician I am going to collaborate with and the scales of the tradition that he or she carries. The lyre is very flexible in tuning. Once I tune on the right notes, I am ready to follow and exchange musical phrases with the other artist. My main focus is to create a conversation between the instruments. As for Lyre ‘n’ Rhapsody, that is my main band, all of us create music and we work on Greek traditional songs, ancient poetry set to music and fresh compositions.

3) Your recording of Sappho 44 for Animating the Ancient World within Our Mythical Childhood has been such a great success. How did you work with Professor D'Angour's score to create the sound-scape?
That was really an amazing project, I enjoyed every moment of it! Professor D’Angour did the arrangement for the first verse, and offered me through Skype and emails all the information I needed to proceed and set to music the other three verses. He sent me the text explaining word by word the rhythm that was hidden in the vowels, the notes of the scale I could use, the proper pronunciation and instructions of what I should avoid. In the same time, he was open to my ideas and was very helpful with all the questions that arose. When I finished the first recording I sent to him and I still remember the relief I felt when he answered, yes, everything is in place….Then it was just a matter of making it really a nice piece, and I would like to thank here the amazing sound engineer Nenad Radosevic, who is always next to me with patience and ideas.

4) Could you tell us a bit about the lyre that you play?
The lyre I play is made by the luthier Nicolas Bras, who is famous for his excellent violins, cellos and all kind of repairs on instruments. It is a pretty long one, closer to varvitos (or barbitos) sound than the lyre. It has a large soundbox and 12 strings. For ancient pieces I use only 9 strings. For Greek traditional songs and other kind of music 12 strings are very helpful. I tried many combinations of strings and it took me some years to find the ideal one. I use guitar strings for the high notes and gut for the lower. It is a vintage, for sure, that can be arranged according to the project. I use a cardio mic for concerts and usually I attain wonderful sound. Still, when I can play in a place with natural amplification, such as churches, I prefer no mics. 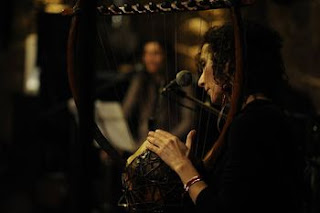 Above, Aliki Markantonatou with her lyre.

5) With Lyre n' Rhapsody you collaborate with Meet Culture in a cultural exchange between Europe and China. What have you learned from each other?
This cultural exchange has been so deep. I could never guess the depth when it started. We were invited by Miao Bin and Eley Yuan, the founders of Meet Culture, to participate in a crossover album. Their close friend, Jang Jing, a world famous Guchen (Chinese santoor) musician received as a gift our first CD, Awakening of the Muse. She shared with us that she was playing it repeatedly until she made up her mind to visit Athens with Jang Di - an amazing Xiao flutist - and record with us. We were listening to their music for some months to get in tune; and when they arrived, we were ready. The recording happened in 5 days. We recorded 20 tracks, all of them beautiful. We chose the 10 best for the album Aegean. We learned that language is not important, just flow with the sound, trust the moment and play when is needed. We learned that we share the same dreams and can enjoy friendship with a glass of wine having Greek or Chinese food. A strong bond developed and the feeling of family is there when we meet. We joke with each other, share our problems and help and support each other. Meet Culture organised a tour in and around Shanghai for all of us and two performances in Athens. The joy of that trip and the wonderful people we met is beyond words. Elegance, care, passion, generosity, kindness to name a few. And then another surprise occurred! Discussing the poetry of ancient Chinese and ancient Greek poets we found so many things in common, we could not resist. We created a performance in which ancient Chinese and Greek poems interact, one after the other in a dialogue of similar ideas and values. It was not easy to do all this translation, but was worth it, and I can assure that you can find many poems in similar forms between these two nations. 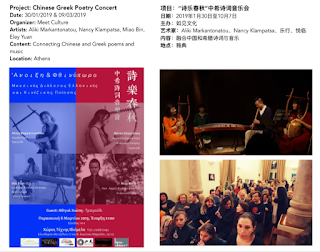 Above, the poster for Meet Culture's celebration of ancient Greek and ancient Chinese music and poetry.

6) Who's your favourite ancient Greek?
What a wonderful opportunity to praise Pericles!!! As an Athenian woman I enjoy Acropolis energy and light! Athens wouldn’t be what it is if the area around Acropolis did not exist. It would be just another town… But, now is an amazing town!!! When I feel tired or sad, I just stroll around Acropolis and feel refreshed and encouraged - thanks to this wonderful soul who managed to challenge the citizens to create this beauty! Thanks to this wonderful soul who offered equality to his spouse Aspasia, and respected democracy, I am enjoying my life in Athens, me, one person out of million people who live here and are showered by the grace of the golden ages. I am always amazed by what Pericles inspired in so many generations!


Many thanks to Aliki for these fascinating insights. Below you'll find some further examples of Aliki's performances and her interview with a Greek lyre-maker working with traditional techniques.

Above, Meet Culture's Greek and Chinese collaboration on a performance of The Iliad. 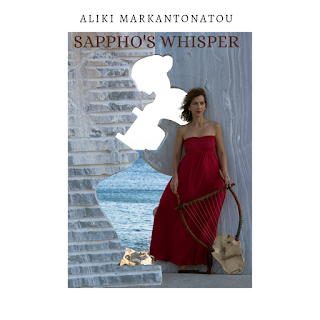 Posted by Sonya Nevin and Steve Simons at 19:48 2 comments: