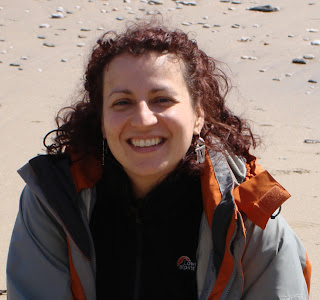 Today we’re talking to Dr Anastasia Bakogianni, Visiting Fellow at the Institute of Classical Studies, and formerly a Lecturer at the Open University. A leading light in the understanding of the impact of antiquity on later ages, Anastasia is the author of Electra Ancient and Modern: Aspects of the Reception of the Tragic Heroine and the co-editor of the newly released War as Spectacle: Ancient and Modern Perspectives on the Display of Armed Combat. We caught up with Anastasia following her return from a successful research trip to Brazil, to talk to her about Electra, murder, and sibling affection...

1) Who is Electra?
Simply put Electra is the daughter of King Agamemnon (of Trojan War fame) and Clytemnestra, and the sister of Orestes. You see in ancient Greece a woman tended to be defined in terms of her birth family. Her parents and sibling are much more famous in Greek epic and lyric where she is just a minor character. In Greek tragedy, however, Electra takes centre stage. She becomes a key player in the dramatic plots about her troubled family and a shockingly transgressive female character. She is the chief mourner of her father, in process becoming closely associated with the act of lamentation. Crucially, Electra also aids her brother in carrying out his plans for vengeance against their mother Clytemnestra and her paramour Aegisthus. They murdered Agamemnon upon his return from the war and dispossessed Orestes. He returns after many years to reclaim what is rightfully his and to avenge his father. The vagaries of textual survival mean that Electra is unique in the Greek tragic corpus because we have her treatment by all three Greek tragedians. She features in Aeschylus’ Choephori (part of the famous Oresteia trilogy, 458 BCE) and is a principal character in Sophocles and Euripides’ Electra plays (the former is dated between 420 and 410 BCE, while the latter to 422-413 BCE). She is also an important character in the latter’s Orestes (408 BCE). What has fascinated later generations of artists and audiences about Electra is her passion for revenge and the lengths to which she will go. 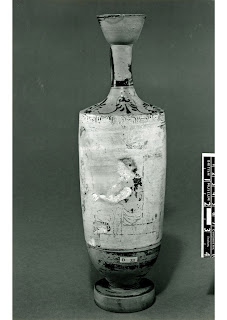 Above, Orestes and Electra at the tomb of Agamemnon, as shown on an Athenian white-ground lekythos, 460-440 BCE.© The Trustees of the British Museum

2) Does Electra appear on any ancient Greek vases?
She certainly does, but not as an avenger. She was most often portrayed as a mourner at the tomb of her father (as in vase above), but it was the theme of her meeting with her brother Orestes that captured the imagination of fourth-century vase painters, especially in southern Italy. Athenian potters tended to avoid portraying scenes from tragedy, but south-Italian potters had no such compunctions, and a number of vases featuring Electra from that region survive. Here are two particularly fine examples: 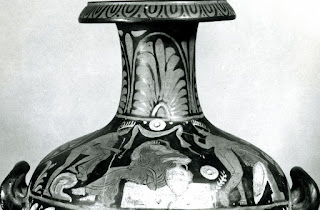 Above, Scene at Agamemnon’s tomb. Orestes and Pylades encounter a mourning Electra. Campanian red-figured hydria, 350-320 BCE. © The Trustees of the British Museum 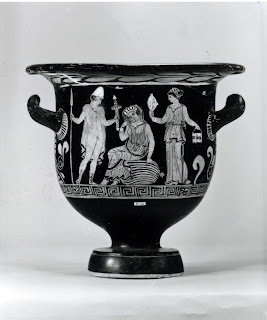 Above, probable meeting of Orestes and Electra, on an Apulian red-figured bell-krater, 375-350 BCE. © The Trustees of the British Museum

I particularly like the image directly above, which is (probably) of Electra on a stripped pillow, shown on a bell-krater (a large vase used for the mixing of wine and water). Her head is veiled as it often is on vases, and her right hand is raised ready to push her veil forward, perhaps as a sign of her modesty when confronted with an unknown male. This suggests that she has not yet recognised her brother. Behind her on the right is her sister Chrysothemis (? probably). Her inclusion is an interesting feature as Chrysothemis appears on stage only in Sophocles’ drama and she never actually meets Orestes in our surviving source texts. Her presence and the lack of a funerary monument indicate that this bell-krater is not actually modelled on any particular play. Rather it is (possibly) an imaginative depiction of a well-known story.

3) Are there any pitfalls in looking for Electra in vase scenes?
Yes! that is precisely the danger in consulting vase scenes when researching Electra as a tragic heroine. The images of Electra we find on ancient artefacts (which include not only vases, but also gems, reliefs etc.) are usually not directly related to her portrayal in the plays of Aeschylus, Sophocles and Euripides. Ancient artists did not feel the need to remain faithful to the plot of the tragedies in which she appeared, but reimagined her in positions and scenes that they hoped would appeal to the ancient consumers of their wares. That is why Electra’s vengeful feelings are not a prominent feature of her portrayal on vases. After all who would want to buy a vase depicting a daughter who ardently desires her mother’s death? There is a possible exception to this rule, but we are not 100% sure it shows us Electra. This possible depiction of Orestes’ matricide includes a female figure on the right-hand side, but we cannot positively identify it as Electra. 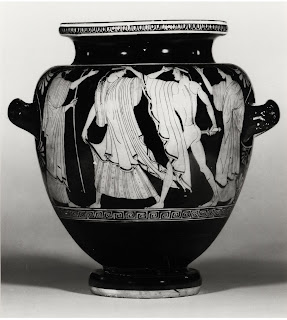 All these question marks also reveal how difficult it is even for experts to positively identify scenes on ancient vases.

4) How have you used these vase scenes in your research?
One must therefore approach vase scenes and other material culture evidence with a certain amount of caution. They do testify to the ways in which Electra was depicted inancient visual culture, but it is a mistake to try and directly link them to her portrayal in Greek tragedy. The best way to handle them is as yet another facet of Electra’s long reception history. These images also signal to us which aspects of the tragic heroine were considered too transgressive for depiction in ancient art. Electra’s dark passion for revenge, so prominent particularly in Euripides and Sophocles’ tragedies, is entirely absent from our surviving images of her in ancient art. Electra can be a witness to her brother’s act of matricide (if that is the correct identification of the scene on the Attic stamnos, above), but she cannot be an active participant. In any case this image is in effect a visualisation of the behind-the-scenes spaces of Greek tragedy. Violence usually took place off stage and was vividly reported by a messenger on stage. The closest Electra comes to taking direct action in the surviving dramas is in Euripides’ Electra where she tells the audience that her hand was on Orestes’ sword when he killed their mother (lines 1224-25). 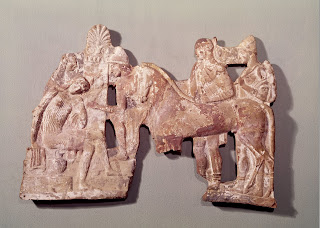 Above, relief depicting the meeting of Orestes and Electra at the tomb of Agamemnon. Greek, 5th century BCE, Louvre, Paris, France, Nationality/copyright status: Greek/out of copyright.

5) As the title of your book reminds us, Electra has remained an important figure in art and culture after antiquity. How similar are the ‘modern’ Electras to ‘ancient’ Electras?
This trend in the reception of Electra in the visual arts continued in the post-classical era, too. You could call it the whitewashing of Electra’s darker side. In the visual culture of the 18 and 19th centuries Electra becomes the mourner par excellence of Greek tragedy. As in classical antiquity her meeting with her brother at the tomb of their father also continued to be depicted as it emphasises the heroine’s devotion to the patrilineal side of her family. In Britain, John Flaxman, Lord Frederic Leighton and Sir William Blake Richmond created powerful and enduring images of Electra captured in the act of mourning. 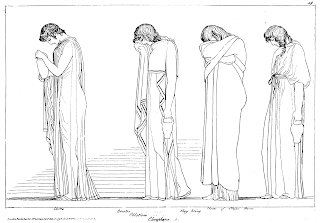 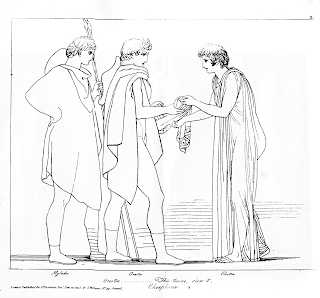 Above, Flaxman’s Electra mourning (1795) and Electra and Orestes recognition scene (1795) © British Library Board.

Above, Lord Frederic Leighton’s Electra at the tomb of Agamemnon (exhibited in 1869), Ferens Art Gallery. 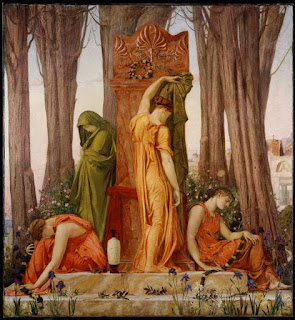 Above, William Blake Richmond, Electra at the tomb of Agamemnon (1874), Art Gallery of Ontario, Canada.

In the 20th century, Electra begun to regain some of her darker aspects. As well as a mourner she once more became the heroine who passionately demanded vengeance, even at the cost of matricide. She also starred on the silver screen, for example in Michael Cacoyannis’ film Electra (1962). 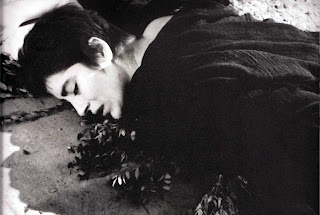 Above, Electra at tomb of Agamemnon from Electra (1962). Photo courtesy of the Michael Cacoyannis Foundation.

In the 20th century, Electra also raised her powerful voice against oppression everywhere. In Miklós Jancsó’s movie Szerelmem, Elektra (Electra, My Love, 1974) the heroine becomes a symbol for revolution, dies and is repeatedly reborn. And these are far from Electra’s only incarnations in modern media.

6) Is she more often a mourner or a matricide?
Electra’s reception is characterised by her dual function as both mourner and matricidal daughter. The two are inseparable in Greek tragedy, but receive different degrees of prominence in different stages of her rich afterlife. Sometimes, for example in eighteenth-century British visual culture, her function as mourner subsumes her vengeful feelings. But that was chiefly because during this period women were viewed as creatures of emotion. Ancient women were often depicted as models of correct female behaviour, so it was not appropriate to portray a daughter who passionately desires the death of her mother. Instead we have the dutiful daughter who mourns her father and is a loyal and devoted sister. In later centuries artists gradually laid claim again to the full spectrum of Electra’s character including her darker aspects. In the performing arts in particular Electra’s passionate cries were heard once again thanks to our modern fascination with psychoanalytical theories. Freud and Jung made the dark side of Electra fashionable again.

7) What were you researching in Brazil?
As it happens I was gathering material about a Brazilian incarnation of Electra. I keep saying that I won’t work on Electra anymore, but then I discover yet another exciting reception of my favourite tragic heroine and I get pulled back in. And this is a particularly dark version of the tragic heroine. There is murder, suicide, incest and much more in Nelson Rodrigues’ Lady of the Drowned (1947). This is a play in which Electra has turned to the dark side before the curtain even opens. But I won’t say any more here as this is a drama that showcases surprising revelations and dark secrets exposed!

8) Who’s your favourite ancient Greek?
Electra, without a doubt will always come first with me, but I am also fascinated by other transgressive tragic heroines such as Antigone, Clytemnestra, Hecuba and Medea. Greek tragedy is a genre famous for its ‘bad’ women. But then again they are so much more interesting than ‘obedient’ women such as Alcestis who chooses to die in her husband’s place in Euripides’ eponymous play (438 BCE). The transgressive women of Greek tragedy also enjoyed much more interesting afterlives and have tended to attract more attention by later artists. Who after all can take their eyes off Medea as she vacillates on stage between her anger and her maternal feelings? Or fail to be both fascinated and repulsed by Hecuba’s bloody act of vengeance in Euripides’ drama that bears her name (c. 424 BCE)? And who could refuse to be drawn in when Electra’s passionate cries are heard in theatre, opera and cinema? It is perhaps a symptom of our turbulent and troubled world that these days we seem to be more drawn to anti-heroes and heroines, flawed, conflicted characters that face terrible dilemmas. And Greek tragedy is full of this type of dramatic personae, which goes a long way towards explaining its current appeal.


Many thanks to Anastasia for sharing these insights. You can find out more about this subject in her book, Electra, Ancient and Modern . You might also enjoy hearing Anastasia talk further about Electra in a short Classics Confidential video:

You can also hear Anastasia chatting with me about the modern use of ancient Greek tragedy as an anti-war spectacle, the subject of her chapter in War as Spectacle:

Posted by Sonya Nevin and Steve Simons at 12:46