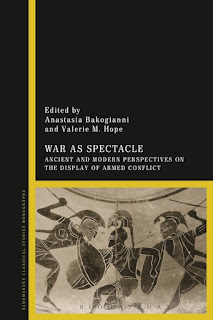 Panoply are delighted by the release of War as Spectacle: Ancient and Modern Perspectives on the Display of Armed Combat.

This new collection explores the ways in which the ancient world treated conflict as a show, a performance, and how that has impacted on ideas about combat in the modern world.

This brief trailer will give you a taste:

Panoply make animations for the modern world that are powered by ancient depictions of the ancient world; and of course, this has included plenty of scenes of warfare, in animations such as Amazon, Well-Wishers, Combat, and the monster Hoplites! Greeks at War. In my chapter for War as Spectacle, I talk about how we interpreted the ancient material and about the decision making process we went through in creating a ‘spectacle’ for modern audiences. You can hear me chatting about some of these themes in this interview with War as Spectacle editor, Dr Anastasia Bakogianni:

Anastasia has also contributed a chapter to War as Spectacle, on her research specialism, the reception (i.e. life after antiquity) of Greek tragedy. Anastasia’s chapter focuses on the films of Michael Cacoyannis, and how he used Greek tragedy to express anti-war ideas:

With a fascinating twist that is typical of War of Spectacle, another chapter show how – at the same time as Cacoyannis was protesting against war - other people were busy using spectacles of ancient warfare to prop up their militaristic agenda.

Other chapters include:
'What if We Had a War and Everybody Came?': War as Spectacle and the Duel of Iliad 3, by Tobias Myers

'The Clash of Weapons and the Sight of War': Spectatorship and Identification in Roman Epic, by Neil W. Bernstein.

'The Greatest Runway Show in History': Paul Violi's 'House of Xerxes' and the Herodotean Spectacle of War, by Emma Bridges.

You can order the book or find out more about it at:
http://www.bloomsbury.com/uk/war-as-spectacle-9781472522290/
Students, you can request books through your university library.

There's also a review available by ancient warfare doctoral candidate Own Rees in Classics for All Reviews.

Hope you enjoy it!

We'll hear more from Anastasia soon, in an exclusive interview about the mythical heroine, Electra. Watch this space :)
Posted by Sonya Nevin and Steve Simons at 12:25