Animation time vase fans! We're delighted to share the first of five cracking animations made as part of the Our Mythical Childhood project . Below you'll find some info on Iris and on how the animation was made, but first, buckle-up for Iris – Rainbow Goddess!

Iris is a messenger goddess. She carries messages from one god to another, especially messages from Zeus and Hera. She has wings so that she can fly fast and far. When she flies, she leaves rainbows in her wake, streaking across the sky! That's where rainbows come from. Awesome!

The ancient Greeks were always on the look-out for unusual natural phenomena – they could be a sign sent by a god. In sunny Greece, rainbows are even more unusual than they are in rainy northern Europe. Iris was often called 'storm-footed' , because storms came with her as well as rainbows. As rainbows are unusual and linked to the coming of rain and storms, ancient Greeks thought that they could even be a sign of war approaching (e.g.Homer, Iliad, 17.547 ). The poet Hesiod said that Iris was a sister of the terrible Harpies (Theogony, 265)! Still, she had a job to do and you don't hang around when you're carrying a message for Zeus or Hera! In an age when we can send messages near and far so easily, it's good to be reminded how amazing the idea of super-fast messages would be. 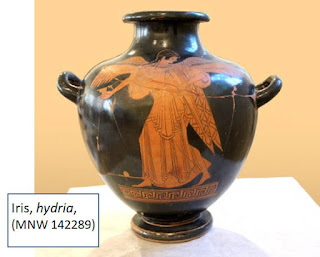 Above, the pot that Iris – Rainbow Goddess was made from - a hydria in the National Museum in Warsaw, in Poland (number 142289).

The pot that we made the animation from is an Athenian hydria, or water carrier, from c.450BCE. Iris is shown as if she has just landed, or is just about to take off - her knees are slightly bent, her wings up. In her hand she carries her herald's staff – the sign that she is a messenger. Her wings have been positioned very cleverly so that they fit onto the shoulder of the vase.

Above, Panoply animator Steve gets a good look at Iris at the National Museum in Warsaw.

You may have noticed – the animation also features a first for us – it's a 3D vase! We measured the dimensions of the vase carefully, then re-created it in 3D. Once we had the digital vase, the animation - made from the original vase's decoration the way all our vase animations are made - was added as a layer onto its surface. The cracks that the vase has suffered and had repaired over the years were also added back onto the vase as a layer. 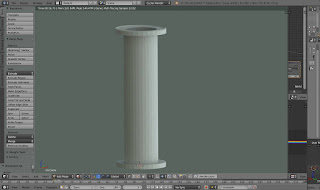 Above, the vase began life as a pillar.

Above, the pillar was manipulated to match the vase dimensions. A room was created to house it.

Above, Iris is invited to the vase! Note the rainbow in her eye to draw out the Iris-eye iris connection that exists in English (and some other languages) - the iris is the coloured part of your eye which controls how much light gets in.

For the soundscape of the animation, we hear rain and the beginning of a storm – perfect conditions for Iris. With it you hear the sound of aulos pipes, played by ancient music specialist, Prof. Conrad Steinmann.

In the future, Iris will have her own page on our website along with the other Our Mythical Childhood animations. We're in the process of making some changes to the website, so for now, if you'd like to download some fun activities to do with Iris, please head on over to her page on the Our Mythical Childhood website: http://omc.obta.al.uw.edu.pl/iris 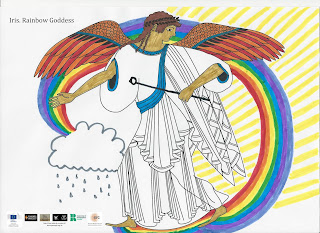 Create your own Iris with the activity sheets on the Our Mythical Childhood page.
Posted by Sonya Nevin and Steve Simons at 10:29