The World of Ancient Music: An Interview with Prof. Conrad Steinmann 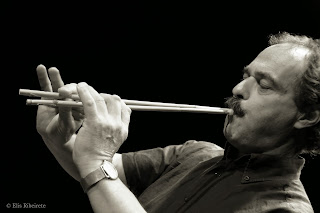 Today we’re hearing from Professor Conrad Steinmann, a musician and musical archaeologist specialising in the instruments and music of Classical Greece. Prof. Steinmann lectures at the renowned music institute, Schola Cantorum Basiliensis in Basel, Switzerland, and leads the Melpomen Ensemble, a group who create and perform music in the classical Greek style. We love Melpomen’s music so much that Prof. Steinmann kindly allowed use it on a number of our animations, including Heracles, Sirens, and Medusa.
Prof. Steinmann talks to us here about the sounds and signs of ancient music…
(Please be aware that this interview contains an image of a human burial).

1. What sparked your interest in ancient music?
It’s my curiosity to know what we can find beyond the surface, to scratch this surface and to find a look into a space where things begin. Of course I loved always, since my childhood, the ancient Greek world.

2. You’re a musical archaeologist as well as a musician. Can you tell us a little about what musical archaeology involves?
It depends whether you focus more the musical side or rather the academic side of archaeology. I’m personally a musician with empirical experiences with deep and far going interests in history and archaeology, but my starting point will ever be music making with exactly reconstructed instruments, the sensual approach also to the music of Greece in the 6th and 5th c. BC.

3. How do you use vase iconography in your work?
Many musical scenes and musical instruments are depicted on vases. I found out that vase paintings between 510 and 480 BC show in an extremely realistic way all the details and proportions of the instruments, realistic enough to be of essential help for an instrument maker, in my case the Swiss Paul J. Reichlin. 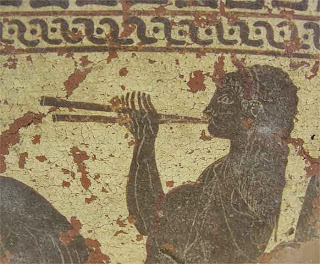 A charming example of an ancient depiction of aulos playing.

4. Is there much difference in the representation of musical instruments between black and red figure vases?
As I said before, it’s less the difference between black and red figure vases, but much more the time period which shows useable paintings. Nevertheless it has to be said, that we have finally more red figured pottery surviving from antiquity, which serves us to give a lively impression of how instruments could have been. 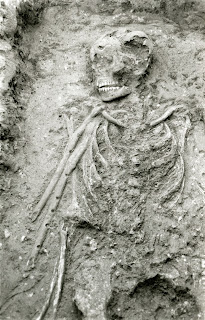 A burial from Pydna which, unusually, includes a set of aulos pipes (left)

5. Playing the aulos looks really difficult; is it very different to playing other wind instruments?
Well, the aulos is definitely difficult to play and difficult to get prepared with its single reeds. Then, of course circular breathing has to be learnt as well as a special technique to articulate with the fingers instead of the tongue.

6. Who’s your favourite ancient Greek?
I always liked the Athenian comedy writer Aristophanes with his specific and at the same time timeless wit and humour. As a child I admired Herakles and now, as a musician of so called Greek music, I love songwriters such as Sappho or Anakreon with their eternal beauty and wisdom.

Many thanks to Professor Steinmann for sharing his thoughts with us. For more on Melpomen and their work, visit www.melpomen.ch and check out their albums, Sappho and her Time (2010) and Melpomen(2005).
Posted by Sonya Nevin and Steve Simons at 14:06