Good news, animation fans! We're serving up a fresh animation for all your animated antiquity needs!

Here is Play Hide and Seek in Herculaneum. You may notice something a bit different... oh my goodness – it's not a pot! This is our first adventure in an animated fresco! It's been created as part of the Locus Ludi project (Locus Ludi: The Cultural Fabric of Play and Games in Antiquity, https://locusludi.ch/). It's made from a wall-painting (fresco) in a house in Herculaneum. The fresco shows a hide and seek style game being played by little eroti, mini love gods, winged children, also known as 'putti'. Locus Ludi project leader, Professor Véronique Dasen, has chosen this time to launch the animation as a gesture of solidarity with all our friends, colleagues, and everyone else in Italy and to give us all something cheerful while we're staying in and avoiding non-essential contact. You can find out more about the animation below, but let's jump straight in. Here's Hide and Seek!

Hope you enjoyed it! 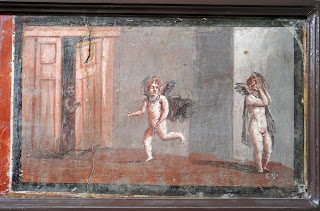 Above, the fresco from which Hide and Seek was made (House of the Deer, Herculaneum). 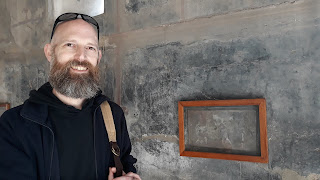 Above, Panoply's animator, Steve, gives a sense of scale beside a fresco from the same series in the House of the Deer.

The House of the Deer (Casa dei Cervi in Italian) is a large and beautifully decorated house right in the heart of Herculaneum. The house, like the rest of the town, was badly damaged by the eruption of Mount Vesuvius in 79CE, but much of it survived, offering us fabulous insight into the living environments of well-to-do Roman citizens. 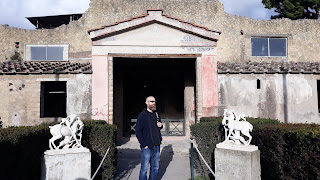 Above, Steve checks out the deer statues that gave the house its name. 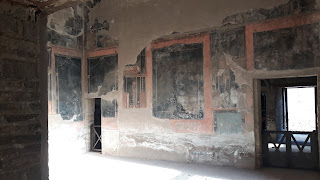 Above, this interior shot gives a further sense of the house's extensive decoration. 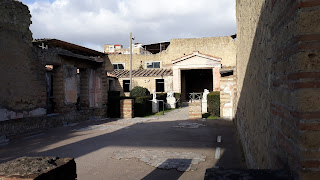 Above, a look across the court-yard towards the main area of the house 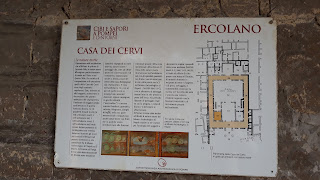 Above, an information board from the house that tells you a bit about it and gives an impression of how massive the house is.

What's going on in the animation? We can see in the fresco that the eroti are playing a hide-and-seek style game. What kind of games did the Romans play? That is one of the key questions of the Locus Ludi project. To explore the answer, Véronique turned to an ancient author called Julius Pollux . Pollux was a Greek philosopher from Egypt and a Roman citizen – very international! He lived in the 2nd century CE. He studied in Athens and eventually opened a school there. He wrote ten books, one of which survives – Onomasticon – an encyclopaedia. Among the entries in his encyclopaedia, Pollux listed the different rules by which children played hiding and chasing games. As you can see in the animation, there were different ways to play. Some of them are still played one way or another, others not so much:

• Myinda is much like the game which in English we call 'Blind Man's Buff', where one player wearing a blindfold hunts the others. Pollux lists two ways of playing this game – in one version the blind-folded player simply tries to catch the others, in the second version the person who's 'it' has to guess the name of the person they've caught – a bit trickier.

• Apodidraskinda has many different names in English, such as 40:40, 1-2-3 In, and Pom-Pom 40. Players start at a base. They hide while one counts, then the hiding players try and get back to the base without being caught. Have you played this game? What did you call it?

• Chalké Muia has not survived so well. It's a chasing game. Two players must try and poke the third with slim strips of papyrus. Fun times!

Visitors to the House of the Deer would have found it amusing or at least sweet to see the fresco of the little eroti playing games that they all knew well from their own childhoods. Perhaps there were children living in that house who still loved to play them!

It was an interesting challenge to make the animation. It's not quite like animating a pot. One of the big differences was dealing with colour. Greek vases use quite a simple colour palette. Frescoes, on the other hand, were painted onto walls using a much wider range of colours. Shading was used to help create the shape of the limbs and the sense of depth. In order to have the figures turn and move their limbs, Steve took spots of colour from all over the figures' bodies to recreate them using the same tones. Once there were versions of their limbs pointing in all directions, the figures were manipulated like puppets, just as the vase figures are. One other geek-tastic detail – perhaps you've already spotted it – the font used for the game names and as speech captions: Steve created that font from the graffiti on the walls of Pompeii. A Roman font for a Roman house! 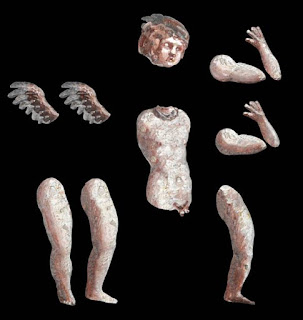 Above, an eroti prepped for animation. 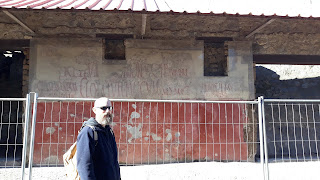 Above, Steve at Pompeii in front of the font that he extended to use in the animation.

If you've finished watching the animation seventy times and are still hungry for more, there are lots more videos about ancient games and gaming on the Locus Ludi website, so have an explore. Stay safe, people! all the best, Steve and Sonya x 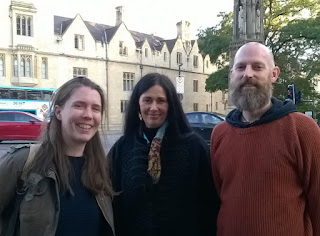 Posted by Sonya Nevin and Steve Simons at 16:14