Every Soldier has a Story: Your new stories and WW1 stories

A huge thank-you to everyone who has taken Every Soldier has a Story photos. It’s fascinating to see the huge variety of ideas people have had about the private lives of hoplites. We’ve included a few below to give you a better sense of what people have been doing and what the final video will be like. You still have time to contribute if you haven’t already. Download the sheet from www.panoply.org.uk/everysoldier.html, send us your hoplite photos before the end of July, and we’ll gladly include you in the video and exhibition.

In 2014 it’s impossible to work on a project about soldiers without being conscious of the First World War centenary. The ancient world was a presence throughout WW1, as it shaped the way many people thought about warfare, duty, killing, and dying. These impressions also shaped the way that war poets expressed their experience of war, including Patrick Shaw-Stewart’s request, ‘Stand in the trench, Achilles,/ Flame-capped, and shout for me,’ and Wilfred Owen’s condemnation of ‘The old Lie: Dulce et decorum est Pro patria mori (‘it is sweet and right to die for your country’, taken from Roman poet Horace’s Ode 3.2)

As a war on an industrial scale, the First World War was (and still is) often regarded as having had a dehumanising effect on its participants. So dire were the conditions and so large the scale of the conflict that the actions and value of the individual could be lost in the horror. As Wilfred Owen observed, this did not match the ancient idea of war as the place ‘where men win glory’ (Iliad, 4.225). Paths of Glory by painter CRW Nevinson depicts the dead not as glorious heroes, but as faceless ruins. The painting was immediately censored. Its implied criticism of the conflict was expected to damage public morale, yet it expressed a truth about the conflict and was purchased by the Imperial War Museum, who include it in their forthcoming exhibition: Truth and Memory: British Art of the First World War. 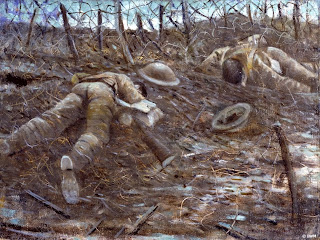 War in the 6th century-BCE was not as dehumanising as the First World War. Campaigns were shorter, conflict was face-to-face, there were no explosives to contend with, and soldiers’ communities were perhaps better placed to support them psychologically. Nonetheless, it is still easy to over-simplify the lives of ancient soldiers. Important though it was to be a warrior, no one was ever just a warrior; each of them had their own families, their own interests, their own priorities, hopes, and concerns. Every Soldier has a Storyinvites you to explore this idea. Who’s your hoplite? What’s his story?

For more on these topics, see:
The Faceless Men, by Allan Little (BBC article on Nevinson's Paths of Glory)

Stand in the Trench, Achilles by Elizabeth Vandiver (full-length work on classical civilisation in WW1)

The Psychology of the Athenian Hoplite by Jason Crowley (full-length work on the psychology of the hoplite in the 5th century BCE; this relates to an era after than that of the vase, but it’s still a very relevant and fascinating work).

Send your hoplites to us at the address on the project page or tweet them to us @SonyaNevin
Posted by Sonya Nevin and Steve Simons at 18:19

Email ThisBlogThis!Share to TwitterShare to FacebookShare to Pinterest
Labels: Discussion of Vases