Time to talk pottery! ...we're delighted to be talking pots with classical archaeologist and curator of the UK's fourth largest collection of Greek art, Professor Amy Smith. Professor Smith curates the Ure Museum of Greek Archaeology at the University of Reading, where she lectures on her numerous research interests, including ancient art, iconography, material culture, museum studies, and digital classics. She is also a founding member of the Pottery in Context Research Network, the International Network of Classical Archaeology University Collections, an emerging Specialist Subject Network on Classical Collections UK and a research associate of the Beazley Archive at the University of Oxford. Professor Smith has authored numerous important works on ancient Greek pottery, as well as co-editing Winckelmann and Curiosity in the 18th-century Gentleman’s Library and Brill's definitive Companion to Aphrodite (2010, with Sadie Pickup). She is a long-time friend of Panoply, having known us for many moons and summers and having invited us to make vase animations from the Ure collection for the Ure View, Ure Discovery, and Every Soldier has a Story projects. We caught up to talk pottery, Pan, and the future of tech in museums...

1) How did your love of ancient Greek art develop?
I was born in Libya and—‘tho we left when I was young (so I don’t remember it)—my Dad liked to say I became a classical archaeologist because of him taking me to Lepcis Magna in utero. When we left Libya we flew to Athens, which again I don’t remember, but.... Maybe it was London, whose museums I always loved. In my formative primary school years, we lived in South Kensington, and I used to walk through the museums on the way home from school, especially on rainy days. My mother kept my drawing of the National History Museum’s giant squid, with its Victorian case, labels & hardware included. I remember the excitement of going to big exhibits at the British Museum. I didn’t focus on Greek art & archaeology until I was an undergraduate at Dartmouth College. On their Foreign Study Programme to Greece we travelled to monuments & museums throughout the country & it’s that first-hand exposure to the real art that really got me going. 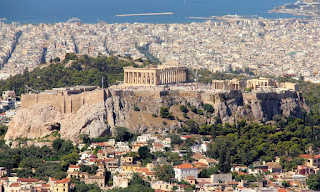 Above, nothing like visiting Greece to encourage a taste for classical art.

2) You're the curator of the Ure Museum. What does a typical week as a curator involve?
The best thing about my job is that there’s no ‘typical week’. As a full-time professor I have to wrap my curatorial work around my teaching and research. Term-time that means I’m in class whenever the timetabling office dictates and, as at other times, I have oodles of meetings with staff & students, course preparation, marking and related paperwork. The museum-specific work entails lots of paperwork and organisation too—applications for funding, arranging finances if someone’s kind enough to donate, purchasing equipment, organising events, etc. 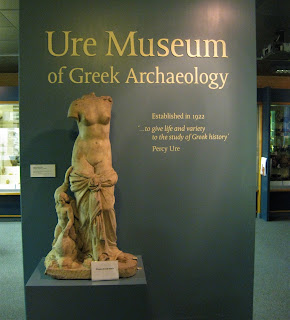 Above, Aphrodite greets visitors to the Ure Museum

I have pop-up and scheduled meetings with the museum's Assistant Curator and Education Officer. Our staff have traditionally been people at the beginning of their careers who quickly move on to other opportunities, so for years I was constantly helping them in their career trajectories, then negotiating with the University to make the job more rewarding for the next person. Generally the part-time staff do the hands-on supervision of volunteers, interns and students on work-experience ‘tho I do a lot of correspondence related to that. I also supervise students and volunteers doing museum displays and/or text. I welcome visiting researchers and lay out the stuff they want to study. Either I or Jayne Holly, our Assistant Curator, has to be available to take artefacts out of display cases, for study, display in another exhibition, or conservation.

While my research mostly takes me into libraries—so I try to reserve one day a week as a library day—I also need to go to museums from time to time for my research. It’s nigh impossible to get someone to pay for you to visit collections so I tend to schedule such trips when I’m travelling anyway for family, lecturing or teaching reasons. So on such visits and at conferences I’m also serving as an ambassador for the museum and its university. So I’m not a typical curator but I doubt there is such a person. 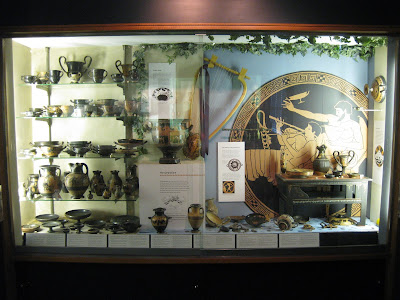 Above, the Symposium case in the Ure Museum, featuring a number of symposium-related pots and the famous Reading aulos.

3) What makes pottery a good source for finding out about the ancient world?
Throughout the world and most cultures from the last 3 millennia or so, pottery is the most prevalent archaeological artefact. Each pot or fragment thereof has markers of its history, even if it doesn’t have artist’s signatures or dates: its mineral composition helps us judge its origins or those of its creators; chemical traces and other contents attest its use and age; its archaeological findspot (if known) tell us also about its age, function or use/reuse, and maybe something about its owner(s); there’s also economic and technical matters to be learned from ancient pots. On top of all of that, however, ancient Greek pottery is usually decorated with figural images, which are our best window into the cultures of ancient Greece: we’ve only a few dozen Greek plays preserved but more than 200,000 ancient Greek pots in the museums of the world. 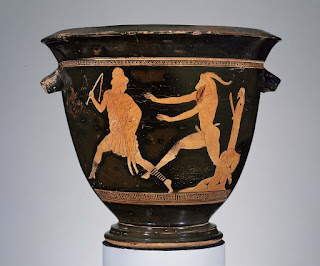 A red-figure bell krater by the Pan Painter now in the Museum of Fine Arts in Boston (10.185). See more on this pot at: https://www.mfa.org/collections/object/mixing-bowl-bell-krater-153654.

4) You're an expert on the Pan Painter. Where does a name like that come from and how do you know a Pan Painter pot when you see one?
Painters of ancient Greek pots were craftsmen, not artists in the modern sense, so their own names don’t seem to have mattered much to the purchasers. Where we have named individuals on the pots, certainly those decorated in the 5th-century, the names are those of the ‘makers,’ presumably potters or owners of the potteries whose products the painters painted. So some painters are named for those artists they worked for, e.g. 'The Meidias Painter' who painted a famous pot potted by Meidias. Others are named for the findspot or museum of their most famous pot, e.g. 'The Empuries Painter' or 'The Berlin Painter' or for the person who owned the pot, e.g. 'The Macmillan Painter'. Sometimes these names conflict, so a while back it was realised that 'The Macmillan Painter' was one in the same as 'The Chigi Painter.' Some painters are named for what they painted, e.g. 'The Elbows Out Painter' or 'The Painter of the Woolly Satyrs.' 'The Pan Painter' is one of the painters known for a particular image he painted on his so-called name vase, a notorious image of the woodland god, Pan, chasing a shepherd boy, on a bell krater in the Museum of Fine Arts in Boston.

The Pan Painter’s oeuvre has been well studied by scholars before but I’m still visiting and assessing the vases that have been ‘attributed’ to this artist, sometimes by overly optimistic excavators and curators. I saw one just before Easter in the Nasher Museum of Duke University, in Durham, North Carolina. I’m confident that the Pan Painter painted one side of the vase, because it had his characteristic anatomical features—short nose, round chin, broad neck, deep chest—as well as drawing tendencies, like an invisible “sketch line” (etched lightly into the surface) vertically through the neck, presumably to help the painter put the head in the right position above the torso. The other side of the same pot had none of these features and presumably was done by another lesser painter in the workshop. 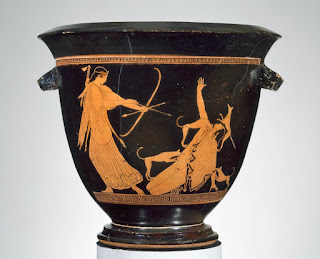 The other side of the Pan Painter's famous krater in the Museum of Fine Arts in Boston (10.185). This side features Artemis finishing off Actaeon as his own hounds lay into him: https://www.mfa.org/collections/object/mixing-bowl-bell-krater-153654.

5) You've been a supporter of Panoply since our first adventures in vase animation. Tell us a bit about your thoughts on the role of technology in museums.
From the birth of museums, alongside neoclassicism, their creators and curators have aimed to welcome people to them, to share knowledge of art, history, and the origins of civilisation, yet by the 20th century they had become misunderstood as bastions of privilege, because of limiting factors like cost, distance and opening times that unfortunately restricted access. Technology has changed all that: social media and web resources share museum content and activities on a 24-7 basis and allow us to reach audiences who never even heard of some of the smaller museums without advertising budgets. We can and should do more with 3D visualisations, like holograms and prints. 3D prints can be used to rejoin disparate materials in two or more museums/countries, like broken pots separated into multiple collections, or even to display objects that might be risky or impossible to move. In the Museum of Cultural History at University of Oslo this December I saw a brilliant 3D print of the tomb of Seti I from the Soane Museum in London. This is sustainable curation. It might help reduce the huge expenditure on travelling expeditions: this money might be better spent on preserving and protecting cultural heritage. 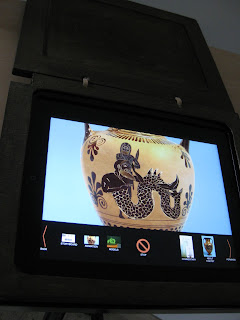 Above, the Ure Discovery museum trail, featuring vase animations and links to the museum catalogue.

6) Who's your favourite ancient Greek?
Athena—goddess of war, wisdom, crafts, and much else—has always been my favourite goddess, even before I knew what feminism was. I might have learned about her first through Herakles, one of the many heroes she protected. She is the city goddess who gave her name to Athens, where I lived for a few years while working on my PhD. I named my daughter, Sophie, for her (in part). Sophia is Greek for wisdom (and poetry) and the owl is their shared symbol; like Athena my Sophie was born at dawn. Athena should be an icon of the #MeToo movement, because she famously repelled Hephaistos’ attempted rape of her. Maybe we should do that story in a Panoply animation?


Many thanks to Professor Smith for talking to us and sharing these insights.
You can find out more about the collections research going on at the Ure Museum by visiting: https://research.reading.ac.uk/curiosi

In other news, we're not long back from an Our Mythical Childhood get-together in Warsaw. Thanks to everyone who helped to organise or took part in the vase workshops (whoop whoop!). We promise a write-up of the many superb presentations on antiquity in young people's culture in our next blog post.

A unified look at the Pan Painter krater (Museum of Fine Arts in Boston, 10.185)
Posted by Sonya Nevin and Steve Simons at 19:01