Adventures in Sweden, Ireland, and England

There have been plenty of adventures for Panoply recently, so an update's in order...
Late last month I had the great pleasure to visit the Humanities Lab, known as Humlab, at the University of Umeå in northern Sweden. This is a very impressive facility, where humanities experts and tech specialists can work together, collaborating effectively on projects that call for the strengths of both. Very cool.

I gave a seminar talk on vase animations as a form of engagement and research activity. I said a bit about the process of developing the animations, a bit about the different ways that museums have displayed them, and a bigger bit about what we're doing within the Our Mythical Childhood project (on which see the video at: www.panoply.org.uk/omc.html. 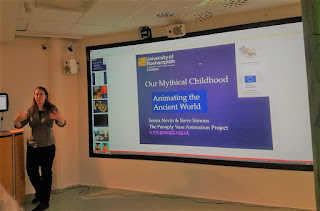 Above, my presentation in the Umeå Humlab.

My animation talk was followed by a presentation on Virtual Reality by Umeå doctoral candidate Claudia Sciuto. This is a hot topic in lots of fields at the moment, so it was great to hear some of Claudia's thoughts. She was looking at how VR can be used effectively in interpreting the results of archaeological excavations. Claudia has seen that making VR versions of sites is particularly useful for collaborative work, as it makes it easier for team members to share their visions of how the site worked and to try out alternative interpretations. 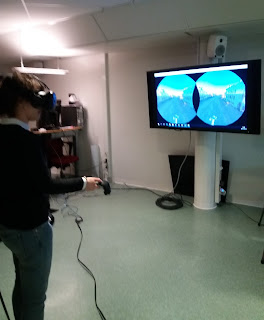 Above, adventures in VR.

It was interesting to try out a VR version of an ancient homestead, based on the findings from an excavation. I also enjoyed visiting a VR theatre environment that was inhabited by a dancer created as part of a Roman pantomime project by Anna Foka, my host in Umeå, Helen Slaney (Roehampton) and Sophie Bocksberger (Oxford), and technical specialists Mattis Lindmark and Jim Robertsson. Dr Foka, a classicist and digital humanities specialist, is currently engaged in the digitisation of an archive in Stockholm – another exciting project to keep your eyes open for. Thank-you to everyone in Umeå for your warm welcome and smart questions.

Always a pleasure to visit Ireland... Next up was a trip to University College Dublin, my alma mater. I was there to give a seminar talk called, 'Games as Prizes. Struggles for Control of Panhellenic Sanctuaries in Classical Greece'. The talk was based to a large extent on chapter 6 of my new book, Military Leaders and Sacred Space in Classical Greek Warfare. I gave an overview of the conflicts fought for control of the panhellenic sites – the sort of overview that makes you realise that this was a much bigger issue than we sometimes imagine. I moved on to demonstrating how it was that Arcadians and Phocians came to take huge amounts of wealth from Olympia and Delphi – and why it wasn’t quite as out of the blue as it sometimes seems. If that's your cup of tea and you'd like to know more, better grab a copy or order one through your library! Many thanks to host Philip de Souza (who you'll remember from his fantastic Panoply interview on ancient piracy) and the rest of the department for great questions and a wonderful visit. 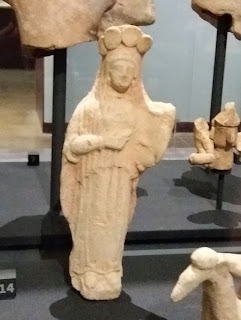 Above, terracotta of a woman playing a lyre, c.400-380BCE, Nicosia, as seen during my Dublin trip, at the National Archaeological Museum (terracotta on loan from the Cyprus Museum, 1934V-183). This seemed an appropriate artefact to snap as our latest Panoply work is all about Sappho, the ultimate lady with the lyre.

In ultra recent news, I'm just back from the UK Classical Association conference, this year held at the University of Kent in Canterbury. My talk there was about fan art which reimagines the Star Wars universe through ancient Greek vase scenes. I showed some of my favourite examples, some of which you may remember from a post on the subject written a while back, and I also talked about ways that that material can enrich sessions with children and young people on vases and antiquity more broadly. After all, if you ask a room full of children "Do any of you have characters from stories or cartoons on your bags or lunch boxes?", you always find that lots of them do, and that can be a route into drawing explicit comparisons about stories and characters they like, and stories and mythical figures real ancient Greek people liked. And a question such as, "If you had to get across Star Wars in one image, what image would you choose?", can be a good way to help them think about what's packed into iconography – ancient or otherwise. The Star Wars vase images can be a fun yet idea-provoking middle ground between more typical contemporary images of heroes and ancient images of heroes.... why not try it out and see how you get on?! If Star Wars isn't your bag, there are plenty of other examples of cross-over vase art; expect further blog posts on this topic in the not too distant future, and check out my Vase Remixes post from a little while back.

It was a real pleasure to be at another Classical Association conference. Fellow panellists gave super papers: Tristan Taylor (New England, Australia), From Republic to Empire – Rome and Star Wars, Octavian and Palpatine, from Roman Empire to evil Empire; Ben Howland (Louisiana State) ‘He could destroy us’: Oedipus, Palpatine, Vader and the self-fulfilling prophecy; and Joanna Komorowska (Cardinal Stefan Wyszyński)‘Go to the Dagobah System’: Or Obi-Wan between epic and tragedy. The panel was convened by Roehampton's Tony Keen, and it was a fine contribution to Star Wars 40.

Another conference highlight was Rosie Wyles' (Kent) paper, Theatricalising everyday objects, in which she discussed the significance of Greek dramatists beginning to use props for the first time, bringing vases onto the stage to use in voting scenes. While we all take the use of props on stage for granted now, it must have been a mind-blowing thing when it was first tried out, and something that changed the relationship between the stage and real life. This was a really wonderful look at a the use of vases in an unusual context, and we look forward to hearing more about it as Dr Wyles' project continues. One last conference highlight... Military Leaders and Sacred Space looking striking on the IB Tauris stall: 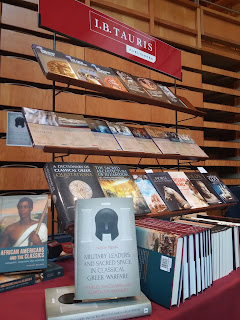 Many thanks to the Classical Association and the University of Kent for all your hard work on the conference.

We'll be back soon, with news on Panoply developments for Our Mythical Childhood, adventures in Poland, and further vase remixes. See you then!
Posted by Sonya Nevin and Steve Simons at 20:33