Death and the Vase: A Panoply Interview with Dr Bridget Martin. 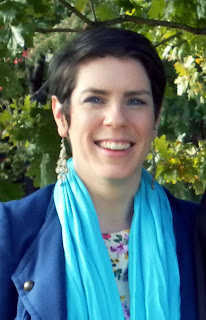 As Sawhain-Halloween sets in, we turn our thoughts to other-worldly matters and talk to Dr Bridget Martin, an expert in death, funerary rites, and the afterlife in ancient Greece. Dr Martin teaches Ancient Greek and Classical Civilisation at University College Dublin and Trinity College Dublin. She wrote her doctoral thesis on the dead in Greek tragedy and is the author of 'Blood, Honour, and Status in Odyssey 11', Classical Quarterly, 64.1, (2014). In the interest of transparency and recalling good times I should tell you that Dr Martin and I studied for our doctorates together, at one point even sharing a cheerful office. As such, I had the pleasure some eight or nine years ago of hearing Bridget present a research paper on the topic of winged psychai on funerary vases. That work has since been developed further and published as: 'Cold comfort: Winged psychai on fifth-century BC Greek funerary lekythoi', Bulletin of the Institute of Classical Studies, 59.1 (2016), a study that analyses psychai as indicators regarding death, bereavement, and ideas about the Afterlife. Dr Martin is here to tell us about this fascinating topic; read on... if you dare.

1) Your research includes focus on rites around death in ancient Greece; what were some of the more important ones?
Some of the most important rites were performed during and after funerals. The body of the deceased was laid on a couch (kline) for the prosthesis (the equivalent of a modern wake), where mourners sang laments, and the body was then transported by ekphora (procession) to the burial site. Women could be very expressive in their mourning, especially during the prothesis: they could sing laments, lacerate their flesh, pull out or shear off their hair or cover themselves in dust. Such was their enthusiasm that legislation was put in place to limit excessive female mourning practices! Male mourners were usually more sedate, typically stretching out a hand over the body (as often depicted on vases) or offering a lock of hair. The dead were also offered gifts, such as vases, libations and food (sometimes including blood and animal sacrifices), either during the funeral itself or afterwards. Vase paintings show us that the living visited the tombs of their loved ones, sometimes with gifts, in order to mourn, and this also occurred during annual communal festivals, most notably the Genesia. These rites offered honour and remembrance to the dead and also allowed for the ritual separation of the living and the dead. 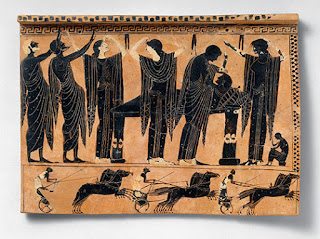 2) Was this an important part of the culture?
Yes, definitely! For us today it’s very difficult to determine what exactly the Greeks believed about the dead and the Afterlife – there is plenty of evidence to suggest that the Greeks believed there was some manner of ‘life’ after death, but also that there was nothing after death. Regardless of individual beliefs, however, it was clearly essential to honour the dead through the rites outlined above. Such was their importance that the denial of burial rites was considered a fitting punishment for terrible crimes, such as temple robbers and killers of their own kin (the denial of burial is an important theme in Homer’s Iliad and in fifth-century tragedies, most notably Sophocles’ Antigone). The rites were preferably overseen by close kin, specifically sons, and, as such, if a man approached the end of his life without a son, he could adopt someone to ensure that he received the customary rites following his death.

3) Your publication focuses on winged psychai; could you tell us what they are?
The dead were depicted as winged psychai on funeral vases, especially lekythoi, from the middle to the end of the fifth century BC, primarily in Athens. They are small, generic, stick-insect-like figures that flit about in the background of images connected with death, most commonly images of the prothesis, images of the god Hermes or the boatman Charon accompanying the dead on their journey to the Underworld, or images of mourning at tombs. The dead are also portrayed as full-sized and very life-like figures on these vases, but the winged psychai are far more fascinating, in my opinion, as they suggest an attempt to capture the dead as they really are in the Underworld – shadowy, flighty and ethereal. The winged figures are often denoted by the word ‘eidolon’ (‘eidola’ in the plural), which means an exact copy or replica, but the word ‘psyche’ (‘psychai’ in the plural) is more fitting as the psyche is what leaves the body at the time of death and travels to the Underworld (our nearest equivalent is the soul, but a direct analogy between the two is problematic), and this is what the vase painters were attempting to depict with the winged figures. 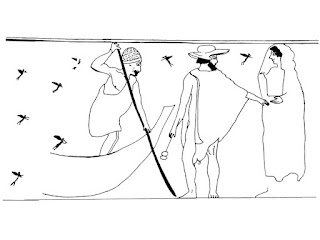 Above, a dead woman (right) is led to the Afterlife by Hermes and met by Charon the boatman and a crowd of winged psychai. Line drawing by Bridget Martin of red-figure white-ground lekythos, attributed to the Sabouroff Painter (475-425 BCE), Athens, National Museum (1926).

4) How do you interpret their appearance on vases? What does it all mean?
Well, there are many meanings, and all or none could be correct! The psychai might merely signal the presence of death, but this isn’t really necessary as they often appear alongside a dead body or a tomb. They might be the tail end of a tradition stretching back to the sixth century BC when winged figures representing recognisable epic figures, such as Patroclus or Sarpedon, were popular. Perhaps the most common interpretation of the winged psychai is that they present a frightening image of what happens after death: you become a flitting shade without individuality or awareness. What I believe, however, is that the winged psychai are comforting figures for both the living and the dead. Firstly, they oversee the performance of the prothesis and the mourners visiting tombs, thus assuring the living that their pious actions are recognised. Secondly, in images in which the newly dead are led to the Underworld or enter Charon’s boat, the presence of multiple psychai gives a comforting suggestion of a guiding hand or even family reunion. Furthermore, the presence of the psychai in images including living mourners maintains a connection between the living and the dead, thus delaying the absolute separation of the two. 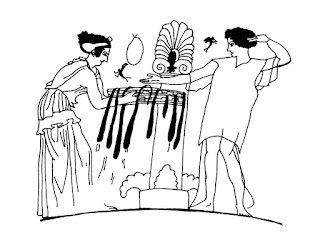 5) What else can we learn from vases about ideas about funerary rituals and ideas about death?
The ancient Greeks held extensive and often contradictory beliefs about death and the dead, which is not surprising for a complex and evolving society, but the vases tell us that honouring the dead was unfailingly important to the living. Images of the prothesis, for example, appear on vases as early as the eighth century BC and remain very common until the end of the fifth century BC, when funeral vases fell out of popularity. Perhaps one of the most important things we can learn from the vases, specifically those depicting winged psychai, is that the ancient Greeks desired to make the unfamiliar familiar. Death was an unknown and frightening process, but portraying scenes of the newly dead being cared for by mythological guides and the ‘established’ dead in the form of winged psychai could go some way to softening the fear of death. 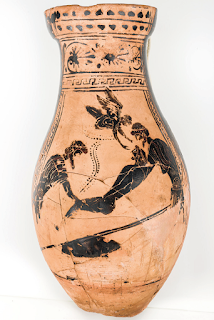 Above, Two men overlooked by a psyche prepare a body for prosthesis, on an Athenian black-figure olpe (525-500 BC). Nicholson Museum, University of Sydney (NM98.150).

6) Who's your favourite ancient Greek?
My favourite (mythical) ancient Greek is Clytemnestra, the wife and murderer of Agamemnon, the leader of the Greeks at Troy. I am thinking particularly of Clytemnestra in Aeschylus’ tragic trilogy the Oresteia, as her character reveals such fascinating insights into interactions and relationships between the living and the dead. In the trilogy, Clytemnestra is a champion of the dead (she seeks revenge for her murdered daughter), an abuser of the dead (she both denies and perverts Agamemnon’s burial rites) and, following her own death at the hands of her son, she is a revenge-driven ghost. As a ferocious figure of vengeance who connives from both sides of the grave, Clytemnestra is in a class of her own!

Thank-you very much for talking to us, Dr Martin!.

If you fancy finding out more about this topic, get yourself a copy of 'Cold comfort: Winged psychai on fifth-century BC Greek funerary lekythoi', Bulletin of the Institute of Classical Studies, 59.1 (2016), either by reading it online www.icls.sas.ac.uk/publications/our-journal-bics or by ordering it through your library. And keep your eyes open for signs of mourning rites and the Afterlife next time you're combing through a vase collection. 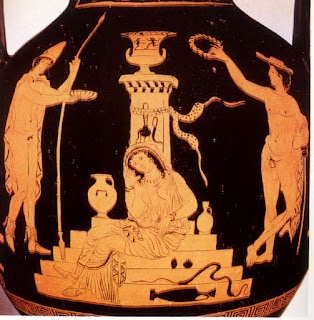 Regular readers may recall this Louvre vase tomb scene as featured in our interview with Anastasia Bakogianni about Electra mourning.
Posted by Sonya Nevin and Steve Simons at 13:47