Symposiums in Focus: A Panoply Interview with Dr Thomas Mannack 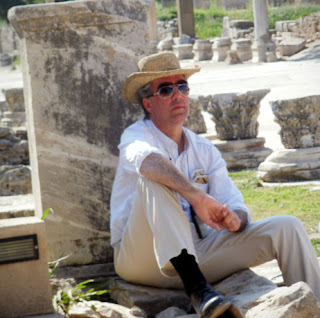 In celebration of the release of The Symposium animation, made for Oxford University's Classics in Communities project, we're talking symposiums and symposium scenes with leading art historian Dr Thomas Mannack, Reader in Classical Iconography at Oxford University. Dr Mannack is the director of the Beazley Archive’s magnificent database of Greek pottery. He is the author of numerous books on Greek vases, including The Late Mannerists in Attic Vase-Painting (Oxford University Press, 2001), volumes of the Corpus Vasorum Antiquorum, and most recently (with Diana Rodríguez-Pérez and Cristina Neagu) Beazley and Christ Church. 250 Years of Scholarship on Greek Vases (2016). Thomas advised us on the creation of The Symposium animation. He’s here today to talk symposium scenes and the joy of ancient Greek art...

1) You have devoted your professional life to the study of Greek pottery – what is it about this art form that appeals to you so much?
Greek vases are fantastically interesting: the painted scenes on Greek pots contain a wealth of information and are second only to the literary sources (and sometimes even better). The shapes suggest a certain use inviting thought about the connections between shapes and pictures. Athenian vases in particular were traded around the whole Mediterranean world and have been found as far north as the Thames near Reading, as far west as Portugal, in Africa in the South, and Iraq in the East; the Etruscans in northern and central Italy were particularly fond of the things. This tells us something about Greeks abroad, the tastes of the indigenous populations, trade routes, and contacts between cultures. The pictures shed light on daily life and show the theatre, workshops, women at home, Greek myths and lost versions thereof, aspects of the funeral and many more. And Greek pots are beautiful.

2) When do the first symposium scenes begin to appear on Greek vases?
The earliest symposium scene appears on an Early Corinthian column-krater, a vase for mixing wine and water for the symposium, painted around 600 BC. The painter has depicted a symposium and turned it into a mythological scene by the addition of inscriptions. 10 to 20 years later the symposium was painted on Athenian neck-amphorae and Siana cups, which were particularly popular with the aristocrats in the Greek colony of Taras, modern Taranto. 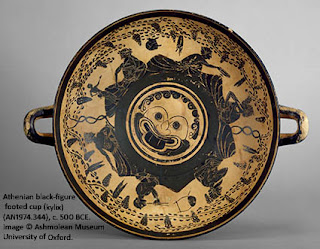 Above, The vase featured in The Symposium animation: An Athenian black-figure footed cup (kylix) (AN1974.344), c.500BCE. Image © Ashmolean Museum, University of Oxford.

3) Is there anything you consider distinctive about the symposium scene that the new animation has been made from?
The Oxford cup is highly distinctive. The symposium is not set in the andron, the special room for the symposium, but held in the open air since the symposiasts are surrounded by vines and are reclining on the ground, not on couches. All of them wear headdresses, another unusual feature normally connected with Persians or denoting eastern influence. The vase may represent a feast held in honour of a god or hark back to some imaginary idyllic past. The foot is unusual too, recorded coyly as “special foot” it the Beazley Archive Pottery database: it consists of a modelled penis with testicles invoking, perhaps, fertility, but being also quite funny. Other details are typical of the symposium: the participants are reclining and dressed in himatia, they play music and are being served by a young cup-bearer. 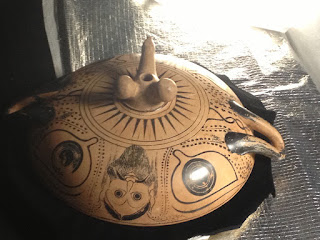 Above, the underside of the Oxford cup. Photo: Twitter, @DrMichaelScott

4) What are the pros and cons of using symposium scenes as evidence for real-life symposiums?
Greek vases cannot show the conversations held during the symposium, but they show everything else:
Participants: male citizens.
Furniture: reclining couches, tables, footstools, kottabos- and lamp stands.
Time: lit lamps, therefore after dark.
Equipment: a wealth of different shapes such as cups, skyphoi, and vases moulded in the shape of heads and shoes, mixing vases such as kraters and dinoi on stands, sieves, and ladles.
Food: a leg of meat depicted on a Corinthian krater, cakes or bread and strips of meat shown elsewhere. 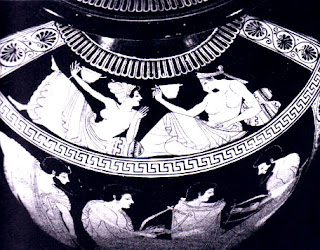 Above, courtesans at a symposium, as depicted on a hydria. Munich 2421.

Entertainment: singing denoted by a standard pose and often letters in front of the open mouth of the singer, lyre players and female pipes players, high class prostitutes and the kottabos game and balancing contests. 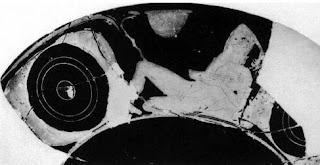 Above, a symposiast sings, as indicated by the way he has thrown his head back. Musee du Louvre S1435.

...And the regrettable effect of too much drink: symposiasts throwing up.
Vases even show the arrangement of the couches around the special room because the painters occasionally depict the short end of one of the klinai (couches). 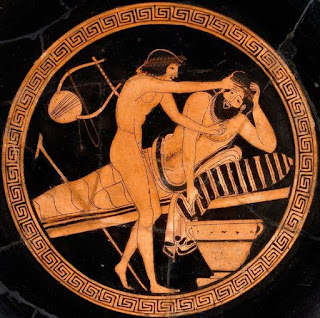 Above, A symposiast succumbs to too much to drink, as shown on the interior of a cup by the Brygos Painter, National Museum, Copenhagen.

5) Why do ancient Greek cups sometimes have Gorgon heads inside them?
There is a lot of deep stuff about the Gorgoneion which is apotropaic, that is it averted evil and bad luck, but it would also have appealed to the juvenile sense of humour of the Greeks, since drinking the wine revealed an ugly face. Moreover, the Gorgon head is round and therefore a simple and appealing way to fill the round interior of a cup.

6) What are you researching at the moment?
I am still writing a catalogue of the white ground lekythoi (oil flasks) of the Ashmolean Museum in Oxford and an article on inscriptions on vases naming Athenians as beautiful (kalos).

7) Who’s your favourite ancient Greek?
The general and statesman Alkibiades, the last member of note of the Athenian family of the Alkmaeonidae. He was a colourful and difficult character who was first an advocate of the aggressive expansion of the Athenian empire, made too many enemies and had to flee to Sparta, the enemy of Athens, and supported them in the war against his native city. Alkibiades managed to fall foul of the Spartans too and had to flee to Persia, where he acted as an advisor to Tissaphernes, satrap of Lydia and Caria (proving that Persia was not “the other” for aristocratic Greeks) until he was recalled to Athens. Moreover, he owned Greek pots.

Thank-you very much to Dr Mannack for these lively insights into symposium culture and The Symposium's vase. To go deeper into the world of the ancient vase-painters, have a read of some of Dr Mannack's many publications on this fascinating subject. 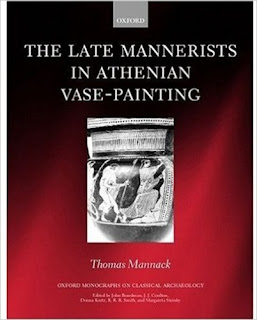 Posted by Sonya Nevin and Steve Simons at 14:46