The new academic year is here. Whether you’re new to the Panoply site or a returning friend, you might find inspiration for teaching with vase animations in our latest publication: ‘Animations of Ancient Vase Scenes in the Classics Classroom’, in the Journal of Classics Teaching, which can be accessed for free via this link: http://dx.doi.org/10.1017/S2058631015000057. Our Animation Uses page is full of ideas too.

We’ll have a new animation for you soon. Steve has been working hard turning the winning storyboard from the Irish Schools’ Storyboarding Competition into a fully-fledged animation. Winners Eamonn O’Broin and Frank O’Grady of Gonzaga College Dublin will see their story launched at a special event in the UCD Classical Museum. The event is free and open to the public, come along if you’re in the Dublin area! (Thursday 24th Sept. 5.30-7.30pm, presentation at 6). 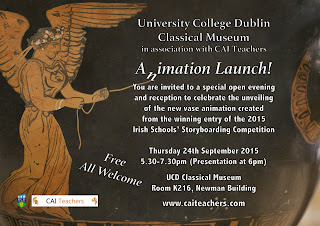 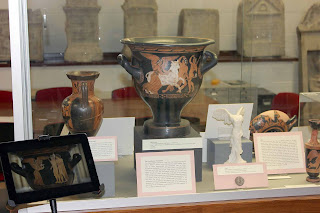 The new animation will join The Procession on display with the vase they’re made from.

Next month we have a new publication out. ‘Animating Ancient Warfare: The Spectacle of War in the Panoply Vase Animation’ will be appearing in a fantastic collection: War as Spectacle: Ancient and Modern Perspectives on the Display of Armed Conflict. War as Spectacle explores the display of armed conflict in antiquity and the many ways in which ancient warfare has been represented in later ages. My chapter looks at the process and decisions involved in representing ancient warfare in Hoplites! Greeks at War, Clash of the Dicers, Well-Wishers, and Amazon.

War as Spectacle editor and long-time friend of Panoply, Dr Anastasia Bakogianni, caught up with us to record an interview about hoplites and the spectacle of war. You can get the inside scoop here:


Sonya’s interview for Classics Confidential
Posted by Sonya Nevin and Steve Simons at 14:57