This week, we’re pleased to be celebrating the winners of the Iris Schools’ Storyboarding Competition. Congratulations to Eamonn O’Broin and Frank O’Grady of Gonzaga College, Dublin! Their winning storyboard will be transformed into a vase animation over the summer and, come September, it will form part of the display in the UCD Classical Museum. 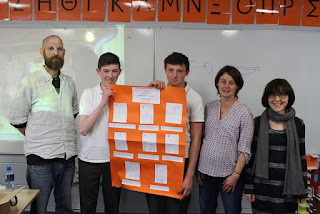 The competition challenge was to interpret the scene on the vase below and to plan a short animation based on that scene. The competition was sponsored by The Classical Association of Ireland – Teachers (CAI-T, http://www.caiteachers.com/) as a way to encourage young people to interact thoughtfully and creatively with ancient artefacts. The competition was open to all under-18s in Irish schools that study classical civilisation or ancient languages. Gonzaga College has a fine tradition of teaching both Classical Studies and Latin and Greek, and Eamonn and Frank’s win is another feather in the cap of this classics-loving school. 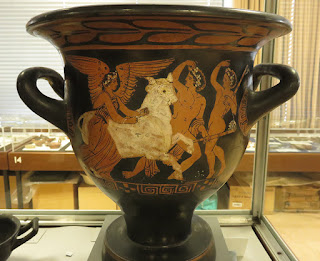 You may recognise the vase. It is indeed the same vase that featured in The Procession. The Procession’s story was planned by MA students studying at University College Dublin. The MA students storyboarded The Procession as part of an exhibition they put together for the museum about creating and using vases in antiquity. The exhibition provided competition entrants with plenty to think about regarding vases, while The Procession offered an example of what vase animations are and what might be going on in the scene. The chance to have two animations made from the same vase is an excellent way to show how different people interpret artefacts and respond creatively in different ways. Two isn’t the limit! Although the competition might be closed, you (or your class) can still look at the vase and plan your own alternative storyboards.

The competition was judged by curator Dr Jo Day, Dr Aude Doody and Dr Alan Ross, all from the UCD School of Classics, while Panoply animator Steve Simons flew in to offer advice on what would or wouldn’t work well in animation. The judges were impressed by all the responses to the vase made by the entrants. The winners’ entry stood out, however, and was admired for the clarity and unity of its story, its re-watchable quality, and the fact that it will help visitors to understand the vase scene. Curator Jo Day has said of the winning storyboard: ‘We really liked the inventive way the characters use the whole scene, hanging from the decorative border and dropping in to the action. As a teaching tool it encourages you to think about how the whole vase works together, front and back, figures and decoration.’


Above, a tricky decision as the winner is chosen.

Steve visited the winners’ class in Gonzaga College to talk to them about how vase animations are made. He had a special meeting with Eamonn and Frank so that the two winners could explain their vision for the animation in person. 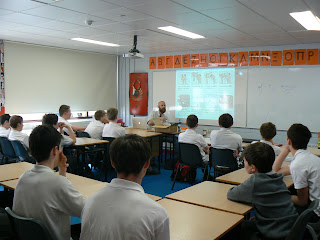 The new animation will be launched at a special event at the University College Dublin Classical Museum in September – watch this space for more details. Well done to everyone who took part in the competition. A big thank-you to competition sponsors, Classical Association of Ireland – Teachers. And finally, another massive CONGRATULATIONS to Frank and Eamonn. 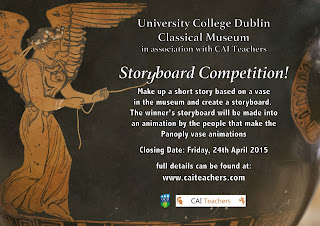 Posted by Sonya Nevin and Steve Simons at 17:30