This week I led a session at Senate House, London, for the Teaching and Learning Ancient Religion Network (TLAR). TLAR’s aim ‘is to establish an international network interested in teaching and learning about ancient religions. This reflects a sense that there is something distinctive about this particular area, even within the broad field of classics.’ A mix of academics, doctoral candidates, and BA students joined the session.

I began by describing some of the material that’s available on the Panoply site and how that relates to the teaching and study of ancient Greek religion. Some of our animations, such as Hoplites! Greeks at War, contain religious elements (such as a hepatoscopy and the erection of a trophy) that have been incorporated into a vase scene that has no religious features. Others animate religious features that already exist in the original artwork, such as The Love of Honour, in which a man receives a wreath and recounts his sporting victories. I also discussed an animation featuring Nike and a sacrificial bull which Steve is busy making now – more on that soon! 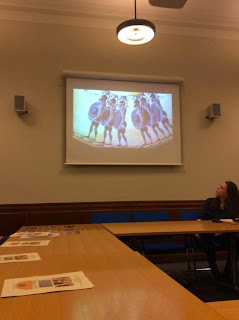 Other animations act out myths, such as Heracles and Persephone and the Sirens, while others animate scenes featuring well-known mythical characters, such as Achilles and Ajax in Clash of the Dicers.

All of these animations make a great springboard into discussions of ancient myth and religion. These could be directly related to the content of the animation, by asking questions such as ‘What are the objects that the characters have in The Love of Honour?’ or ‘What is the trophy’s function in Hoplites!?’. Alternatively, they can be less directly related, with, for example, Clash of the Dicers acting as a gentle introduction to a discussion of Ajax, Achilles, or the Trojan War.

The animations can prompt a number of other sorts of activities. To some extent these are activities that can be done just with vases, but the accompaniment of the animations seems to make students (young and older) more enthusiastic about the process and can also help people to look at the vases with more attention and more creative freedom.

One great activity is virtual curating. Set your students the challenge of creating a case that expresses the theme of ancient religion. They don’t need real vases, let them loose to pick artefacts from books and online catalogues. Ask them to write text for their cabinet and get them to pick (or plan) an animation to include in their display. This is a fun activity, but it’s also challenging and it encourages students to imagine themselves in a leading role using their knowledge to help others.

Another activity is review-writing. Ask you students to pick an animation to review and analyse, paying particular attention to the representation of gods, heroes, or religious activities. Alternatively, ask them to write scripts for the animations, working in groups or on their own. As the Panoply website has so much information about ancient topics, it’s also a safe place for teachers and lecturers to leave students to explore and research. Set them a question or a topic and let them spend time on the website putting together their response. The Panoply website can also be used for the curating challenge as there are so many images and links to ancient literature.

One of our favourite activities at Panoply is storyboarding. Storyboarding based on vases encourages people to pay close attention to the details within a vase scene and it’s a fun yet thought-provoking way for people to bring together and draw on what they’ve learned. If you’ve been covering Greek religion with a class for a few weeks, let them process some of what they’ve learned by putting together a story for an animation through a storyboard. This will really help them to make connections. By working in groups they can weigh-up different possibilities. If lots of animations are planned from the same vase, this will also help to release students from the tyranny of ‘one interpretation’ when they see the different directions their class-mates have taken their animations in. There will be an interesting discussion when the groups share and compare their work.

Towards the end of the session we created some storyboards ourselves. It was great how everybody got on board; ideas and a happy buzz soon filled the room. You can see a few here: 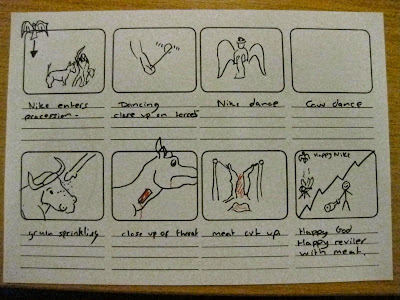 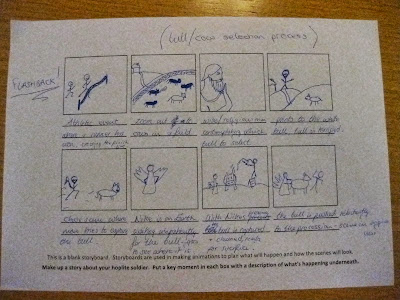 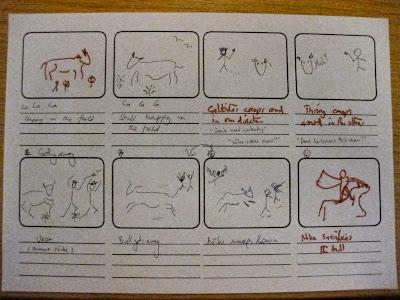 Posted by Sonya Nevin and Steve Simons at 12:22