Classical Association 2014 and Beyond the Phalanx

April is conference season for classical studies. Panoply joined in by giving presentations at two fantastic conferences, the Classical Association Annual Conference and Beyond the Phalanx. 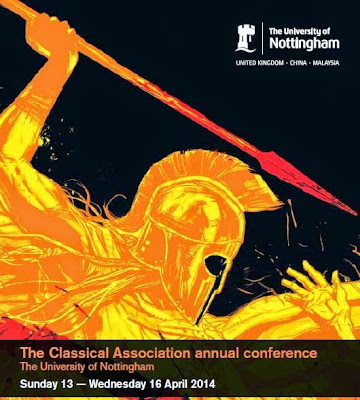 This year’s CA was held at the University of Nottingham. I had a chance to pop into the archaeological museum on campus, and was rewarded by the sight of a fine set of Samian ware pottery that was excavated in the UK. You can visit the collection site here: http://www.nottingham.ac.uk/museum/samian.php

I was speaking on a joint panel about eLearning in classical studies, organised by Dr Bartolo Natoli of the University of Texas.

Bartolo’s paper, ‘Grounding Classics Pedagogy in the Theory of eLearning’, urged us all to put pedagogy first to make sure that eLearning is used to its full potential. Simon Mahony of University College London presented ‘Open Educational Resources and their Place in Teaching and Research for Classics.’ He talked about the digital resources that are available for classics teaching; you can find out more by looking at what’s going on at the Centre for Digital Humanities: http://www.ucl.ac.uk/dh/

Mair Lloyd and James Robson of the Open University discussed trends in eLearning and Ancient Languages in UK Universities. The Open University are long term advocates of eLearning; they have astonishing amounts of material available for the public as well as for their students. One of Panoply’s earliest animations, The Cheat, was made for an Open University eLearning module, The Ancient Olympics: Bridging Past and Present

My own paper, ‘Animating Ancient Vases', looked at the many different ways that Panoply’s vase animations can be used in teaching. This moved from using the animations as a basis for creative activities based on vases to using the animations as a springboard for discussions of classical topics. One thing I stressed was their adaptability, and the possibilities of using them for teaching at every level, from primary through to higher education, and community learning.

This week I attended Beyond the Phalanx: Ways Forward in the Study of Ancient Greek Warfare. This conference was held at the Institute of Classical Studies in London, organised by Cezary Kucewicz and Roel Konijnendijk, doctoral candidates at University College London. The conference brought together the latest research in the varied field of ancient Greek warfare, looking at the ideology and practice of war, as well as its social and political implications on the wider Greek world. For me, highlights of the conference were a paper by Dr Fernando Echeverria of Madrid on recent trends and future directions in the study of the iconography of Greek warfare on Archaic vases, and Prof. Hans van Wees’ questioning of the uniqueness of Greek hoplites in a world where Lydians, Carians, Assyrians and Egyptians all knew a thing or two about heavy infantry. Expect some sparks to fly from forthcoming publications on that topic!

My own paper, ‘Animating Ancient Warfare’, looked at some of the decisions we’ve made in creating Hoplites! Greeks at War. I began with my inclusion of the Hoplites! vase in ‘Citizenship’ when I was designing that case as a volunteer during the refit of the Ure Museum in 2004. I included it there primarily so that warfare and fitness would be seen as part of a citizens’ duty. I moved on to talk about the vase itself and the way that it combines athletics and fighting. I described how that aspect of the vase influenced our decision to include a training scene in the animation. I talked about fighting style, and how we will have fighters using both overarm and underarm spear thrusts, just as the fighters on the vase use both. I also drew attention to the fighters’ swords. Although they are primarily spear-fighters, they all have swords, so swords will play at least some part in the Hoplites! battle.

You can see the slides from this talk here

A final word is a big Thank-You to the organisers of these conferences and panels for all their hard work and for asking us to take part. 
Posted by Sonya Nevin and Steve Simons at 15:42