Hoplites in Space: The Style of Star Wars

Work on the current hoplite animation continues well, and all this staring at close-ups of hoplite helmets has prompted me to reflect on a) how stylish they are, and b) how stylish the hoplite style helmets in the Star Wars universe are.
You’ve probably noticed the influence yourself. Let’s have close-up look at it now. The influence of the classic Corinthian style hoplite helmet is most clearly seen in the helmet worn by legendary bounty-hunter Boba Fett: 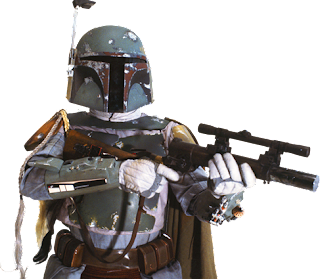 The bounty-hunter’s helmet shares the hoplite helmet’s full-face design, with the distinctive horizontal eye-strip and narrow vertical gap between cheek pieces. This offers extensive protection, while the anonymity of the piece is also appropriately intimidating. The space helmet adds to this effect by including blacked-out sections where the hoplite helmet would have gaps – a difference no doubt influenced by the different atmospheres of space and planet.

Boba Fett inherited his kit from his bounty-hunter ‘father’, Jango Fett. While the two bounty-hunters made the armour famous, the Clone Wars animated series revealed that the distinctive panoply was actually a customised version of the typical traditional military wear worn on the planet Mandalore. We can see the helmets of Mandalorian soldiers here: 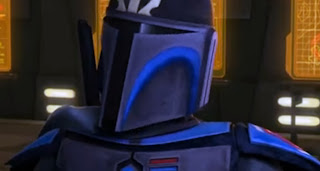 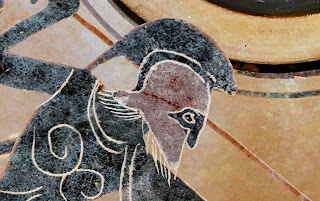 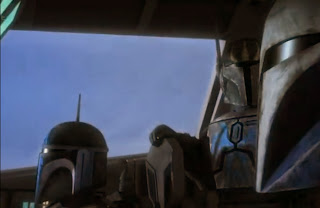 Unlike ancient Greeks, the Mandalorians include female soldiers in their ranks. This Mandalorian (right) demonstrates the female form of body armour. There’s a subtle difference in the helmet too – the female helmet includes a nose piece coming down vertically from between the eyes – a feature that makes it even closer to the hoplite helmet. Greeks often wore plumes on their helmets; senior Mandalorians have the option of attaching plumes too. 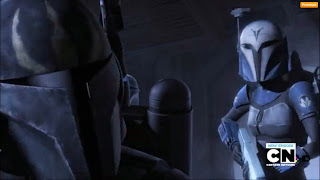 In another difference from the Greek panoply, the Mandalorians sport armoured trouser legs rather than the re-enforced kilts of the hoplites. Consideration for the demands of space rather than the heat of Greece probably made the trouser leg style more appealing. 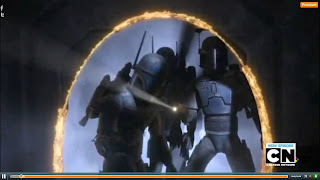 Like classical hoplites, Mandalorian soldiers have a sense of their own individuality despite working in groups. This makes them different from the specially bred clone troopers who were created to serve the Republic. As such, it’s appropriate that they look different. The helmets of the clone troopers also owe something to the hoplite helmet; the full face with eye holes style is there, but there is a mouth-shaped ventilation point that is very un-hoplite. Clone troopers wear trousers rather than kilts, but nonetheless, we sometimes see an over-kilt for ceremonial occasions – a welcome nod to hoplite style. 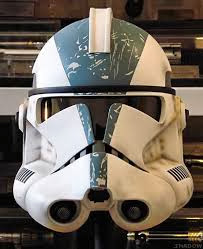 As Republic turns to Empire, the clone troopers are re-equipped. The new helmets are much more rounded – much less like hoplite kit. Dark times indeed. Darth Vadar had to look different from both Mandalorians and clones. His helmet is truly individual; with its wide flare curving out at the base, it owes more to Samurai style than Greek.


For a little something on the classical themes in Star Wars, have a look at Edith Hall’s blog post on the Return of the Jedi and Greek tragedy: http://edithorial.blogspot.co.uk/2013/05/may-force-of-greek-storytelling-be-with.html
Posted by Sonya Nevin and Steve Simons at 18:01