That’s right – we’ve past 50,000 views of Panoply’s vase animations, so thank-you and ευχαριστώ again for watching, we really appreciate it.

This latest animation is made from an amphora by the Leningrad Painter – named after the city (now St. Petersburg) where many of his pieces are housed. The Leningrad Painter was an early mannerist painter, working in the early to mid-fifth-century BCE as part of a group known for depicting somewhat exaggerated gestures and for their fondness for scenes that were unusual or drawn from daily life.

On this amphora we see a young warrior being wished well as he leaves for a campaign. He shakes the hand of an older male figure – perhaps his father – whose hair has been outlined with black slip but not filled in, creating the impression of white hair. The warrior is well-prepared for his campaign, with a long thrusting spear, back-up sword, and a traveller’s hat to keep sunstroke at bay. A second male well-wisher is in-between the ages of the two central men, bearded but not yet grey. On the far left, a woman prepares to pour a libation offering; she holds a dish in her left hand and a small jug in her right. Like the man on the right, the woman is bent forward to fit neatly into the curve of the vase, accentuating the focus on the warrior. The handshake, or dexiosis, with a departing warrior became quite a frequently reproduced scene, and – with wars flaring up in most years of the classical period – was one that lots of families would recognise from their own lives. 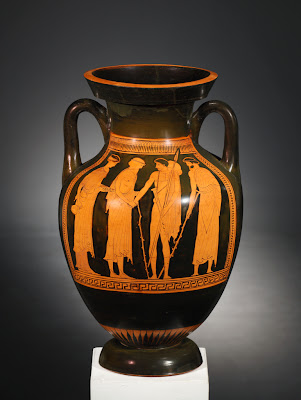