The second of eight new animations created for the Ure Discovery trail is now up on Panoply! The animation was storyboarded by pupils at Addington School, a school in Reading for pupils with special educational needs. The Addington pupils created the story and storyboard as an interpretation of an archaic Athenian vase. They also excelled in the creation of other artwork based on the vase, producing the majority of the pieces displayed in the Ure Discovery exhibition.

Heracles is shown on a huge number of Athenian vases of the sixth century BCE. It seems that the aristocrats who ruled Athens then associated the city (perhaps even themselves) with Heracles, Athena’s favourite (see the work of the great vase scholar, John Boardman, on this topic). This made Heracles popular, but once democracy was developed at the end of the sixth century, Heracles’ popularity declined at Athens, and Theseus became more prominent on Athenian vases.

Heracles remained extremely popular in the Peloponnese and other parts of Greece, and interest in him never totally died out even in Athens. Heracles remains the subject of interest today. Last month an international academic conference, Hercules: A Hero For All Ages, was held at the University of Leeds http://www.leeds.ac.uk/hercules2013 . A quick look at the abstracts in the download section of the conference site will show you the enormous range and depth of research currently going on into this great hero. 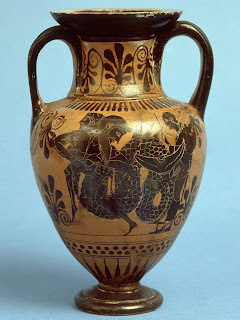 This is the vase used in the Heracles animation. It's really quite small, only about 20cm high.
Posted by Sonya Nevin and Steve Simons at 13:38

Email ThisBlogThis!Share to TwitterShare to FacebookShare to Pinterest
Labels: Discussion of Vases