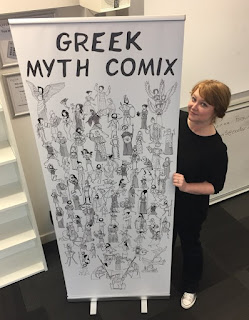 Earlier this year, Panoply were delighted to participate in the Iris Project's Festival of Imagined Worlds. While we were there, spreading the joys of vase animation, we were very pleased to meet L.E Jenkinson (aka Laura Jenkinson, aka Jenks), author and illustrator of the wonderful Greek Myth Comix (http://greekmythcomix.com/) and an experienced teacher of Classics at Churcher’s College in Hampshire (UK). Now we're pleased to share an interview with Jenks giving the low-down on her comics revolution...

1) The Greek Myth Comix stick-figure style is a real pleasure to look at. How did the style develop?
Thank you! Well I’ve always enjoyed stick-men and would draw huge stick-figure battles as a kid. I really like the simplicity of stick men. You can get a lot of physical expression out of a simple assortment of lines. They’re also really quick to draw. I thought about trying to add faces, but it’s been done, and I hate it when someone puts a face to a character; we all already have our own imagined versions.

Since children love details, especially when they can recognise something or an image references something they know, I compromise: I fill my comics with details that call back to Greek black or red-figure pot artwork or traditional costume, or even cheeky references to modern pop culture. I keep the bodies simple and leave faces blank, save for an occasional eyebrow or other indicator of emotion, so the reader’s imagination still has an important role. I’ve started going back over older comics recently and noticing how my style has actually developed quite a bit and become a bit more…complicated. For my next project, continuing the life of Heracles, I’m going to go back to that much more simplistic and symbolic style.

Above: The original angry baby – from the Greek Myth Comix Heracles.

2) What drew you to classical antiquity?
I'm honestly not sure. I’ve been interested in the period since I was small. I grew up in London and my parents took me to museums repeatedly. I remember always wanting to get mythology books out of the library. I have at least one photo of me dressed as a Roman! My state school was able to offer Latin as an extra-curricular subject, and then I discovered that Classical Civilisation was an A-Level option. I kept following that road through to University, where I was able to take some classical literature modules, and then on to my first teaching job. I’ve always viewed it as more of a hobby than a job because I enjoy it so much!

3) What challenges do you face in selecting, representing, or adapting particular myths or stories?
It’s more a case of what to leave out of the myths – I do a lot of research and there are often several versions of each myth, the most popular version and then alternatives. It’s difficult to leave details out, but I’d probably end up making each comic about three times longer to accommodate all the possible versions of every story.

Above: Name that scene.... a scene from Greek Myth Comix mixing visualisation and a useful study point.

4) Your figures and scenes often have a relationship with ancient vase scenes. Could you tell us a little about how that works?
In my original comics I started using vases and pottery as image references, sneaking them in so my classes might recognise them and make connections, as well as using them as models for furniture, clothing, and weaponry. For the Odyssey comics, some of the most famous episodes of the poem are illustrated on pottery (most of which can be seen at the British Museum, my favourite), so of course I had to take inspiration from those. Most recently, in an effort to educate my class on types of pottery, I made a colouring book featuring one piece of pottery for each of the Olympian gods, which I copied freehand. It was difficult to choose just one piece for each! Vases are excellent learning tools: the limited colours and techniques used make it easier to focus on just what is being portrayed, and the figures, details painted on with just a few well-chosen sweeps of a brush, are practically comic art themselves. 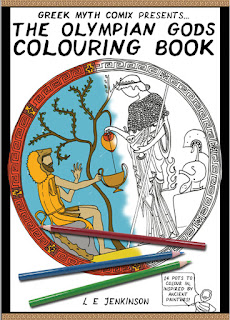 5) Do you have any top tips for how to include the comics in teaching?
Each different type of comic can be used quite simply in class as handouts, such as the ones on the literary features of Epic poetry and tragedy, which students can then keep as an aid to memory. The longer myth posters are rather fun for decorating the classroom and then referring to when the characters involved come up in lessons. And, of course, the Odyssey comics are intended as a revision guide: I go through each book with my class, asking them to remember the next event before looking at the comic to help them, and then they read the comic and make notes in bullet-point form that they can go back and compare to their notes in their textbooks. It gets them to actually re-read the text several times and they can visually recall important details from the comics that they might miss out when just reading the text.

I really like hearing from teachers on Twitter about how they’ve used different comics! Lots have used the pages from the Olympians colouring book as sheets to introduce each god, and a ‘build your own Gladiator’ sheet to, well, make their own Gladiators! Some teachers put the finished student work through an animation programme where the students could add their own voices and details of the characters they were animating. My real favourite is when the students draw their own comics. Using stick figures reduces the pressure that some of them feel to draw ‘well’ as anyone can do them and they’re immensely satisfying! 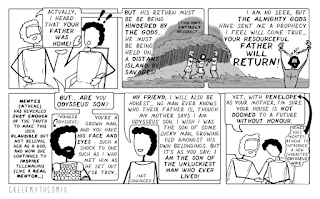 Above: An excerpt from the Greek Myth Comix Odyssey.

6) How did you get into teaching? What advice do you have for people thinking of going down that route?
I was actually initially resolute that I’d never become a teacher because I kept being told by friends and teachers that I’d be really good at it, and that somehow put me off. I worked as a bookseller in Oxford for several years before I gave in and did a PGCE. I’m actually trained as an English teacher, however, I got really lucky and found a job teaching English with Latin and Classics which has been absolutely life-changing. I mostly have Classical Literature experience rather than Ancient History, so I’m partially self-taught which has been incredible fun! My best advice to prospective teachers is always to go off and do something else first. You can’t expect to educate others if you haven’t lived a little first. If you can even get work within the subject area you’d like to teach then that’s even better, but just get out there and do something. It will also make you more certain that teaching’s where you want to be, and you don’t want to be mistaken about that. 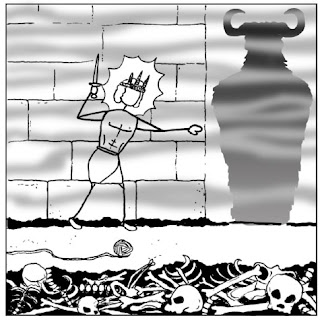 Above: Theseus – "total jerk" – from an activity sheet produced via collaboration between Greek Myth Comix and the Cambridge School Classics Project .

7) Who's your favourite ancient Greek?
Cripes, this is so difficult! I’m a literature geek, so I immediately go for fictional characters. It’s almost easier to say who I don’t like – for example, Theseus is a total jerk, and Paris is a truly dreadful person. I have a lot of sympathy for Achilles. He’s so emotionally complex. He’s locked into a culture of shame during an epic war, with all eyes on him and his reputation, and cursed with the knowledge that this is all he can expect from his short life. He really makes a mess of things. He’s one of the first tragic heroes. And, there’s never been a film interpretation that fully does him justice, despite his story and reputation having lasted for 3000-odd years. From history, my favourite Greeks are probably the Berlin Painter and Exekias , pottery painters who have inspired me so much. They are the unsung heroes of Classical Civilisation.

Thanks very much to Laura for some wonderful insights into the world of the Greek Myth Comix. If you'd like to see more, check out the website at: http://greekmythcomix.com/ - there's a huge amount of open-access (free) and purchasable material – including the comics, posters, and the colouring book. You can also follow on Twitter at: @GreekMythComix. Stick figures are great for storyboarding with vases too – enjoy getting creative!
Posted by Sonya Nevin and Steve Simons at 17:24