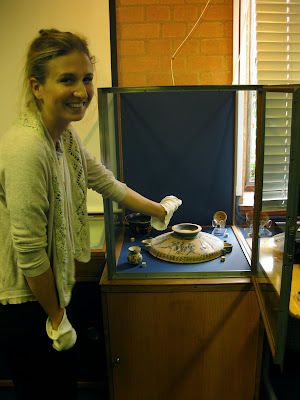 In this latest blog we're delighted to be talking with Gabrielle Turner, a 3rd year Classical Civilisation student at the University of Roehampton in West London. Gabrielle recently contributed to the Panoply project Every Soldier has a Story as part of her internship at the University of Reading’s Ure Museum. In this interview she discusses her internship, curating a temporary museum case, and studying Classical Civilisation.

1) Tell us about your internship – what did you do?
At my internship at the Ure Museum I helped out with their database by logging in artefacts, and helping out with the exhibit. The latter was a job that I carried on working on after my internship was finished.

2) You curated the Every Soldier has a Story case – what pieces did you choose and why?
I put in a lamp that depicts a ship because there is not much art in the ancient Greek world that portrays the navy. I found this interesting especially as they played such a significant role. The reason for this was because the navy was made out of the poorest citizens and the rich would not want the lower class shown on their vases.

Another vase that I put in depicts a scene of young men performing athletics. I thought this one would be interesting to go in because it will show the visitors how important citizen soldiers were to the state. They had to be trained from such a young age; this vase will give visitors an idea of the intensity of their training. 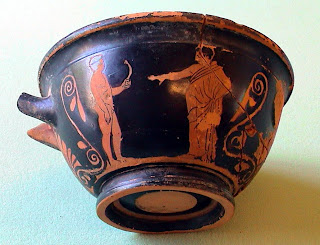 I also chose a vase depicting hoplites in full armour, looking as if they are heading to war. I chose this one because it highlights how glorified war can be. 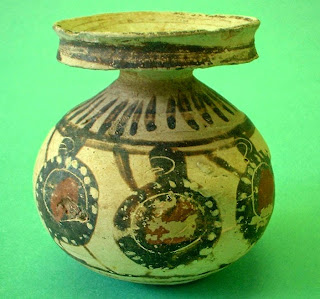 3) What are you studying at Roehampton for your Classical Civilisation degree?
My current modules this term are Latin and Demosthenes and the Rhetoric of Power. I am also writing my dissertation on the character Tydeus in the ‘Thebaid.’ I have found this great to work on as I have been able to be more independent in my study and chose a subject that I have a lot of interest in.

4) How did you arrange the internship, and would you recommend the experience?
I first sent an email to the Ure Museum telling them about my interests and future career prospects and asking if I could do an internship there. I got my lecturer to double-check my email. I also attached my CV to the email. The process was amazing, it felt great to have the responsibility that I was given. I enjoyed every moment of it and I would definitely recommend this experience to fellow students.

5) Who’s your favourite ancient Greek?
This is tough! I would have to choose Diomedes, son of Tydeus. This is because I find that he is extremely underrated in the Iliad, even though he plays such a prominent role in it. I also like how wily Diomedes and Odysseus are; they work well together as a team.


Many thanks to Gabrielle for taking part in the project and for talking to us today. 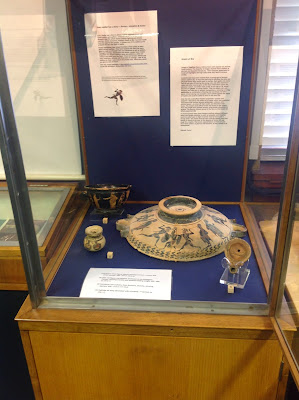 The completed 'Every Soldier has a Story' case.

Posted by Sonya Nevin and Steve Simons at 09:00