Every Soldier has a Story – Live Event

Hoplites! Greeks at War has had its first public showing at a celebration of the Every Soldier has a Story project. We’re delighted that Hoplites! was well-received and glad that all the different ideas and artworks generated through the project are now being shared.

Joining us at the Ure Museum for the day were pupils from the East End Classics Centre, who are based at the BSix sixth-form college in London. The pupils, aged from 16-18, got stuck into a day of ancient-world activities. They toured the University of Reading’s Classics Department and Archaeology Department, finding out what undergraduate study in those subjects includes and enjoying handling sessions with ancient vases and real human remains. They joined Sonya in the museum for a session on ancient Greek warfare, and after watching the Hoplites! trailer and studying its vase, they planned their own storyboards. 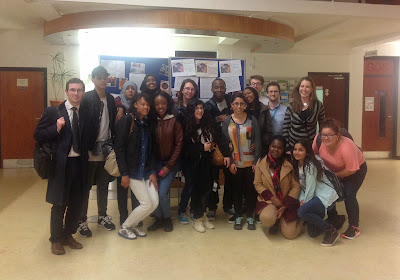 The EE Classics Centre pupils then took to the essential task of putting-up the exhibition for the evening’s launch event in anticipation of the public’s arrival. The exhibition included images of vases featuring scenes of ancient warfare, images of armour, maps, photos from the Every Soldier photo-film, a display about the Thiasos Theatre Company, one on hoplites in art after antiquity, and plenty of storyboards and artwork relating to the Hoplites! vase including work by pupils at the UCL Academy, Kelmscott School, Kids Company, and the East End Classics Centre itself. (You can see much of this material on the Every Soldier project page)

One the evening event began, guests heard an introduction to the Every Soldier has a Story project – about the concept, vase, and participants. They then enjoyed a video of the Hoplites! storyboard, accompanied by live music from composer John White and musicians MJ Coldiron and Jasmine Blundell from the Thiasos Theatre Company. Singing bowls and percussive bells created a memorable atmosphere evoking ancient Greece and the tense anticipation and excitement of combat. The Every Soldier photo-film was played next, with Thiasos accompanying and picking out themes through their magical sound-scape. 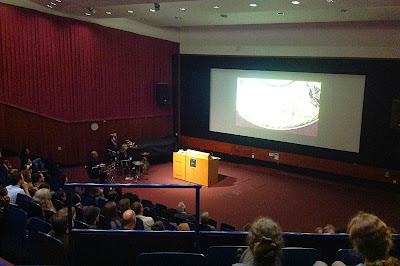 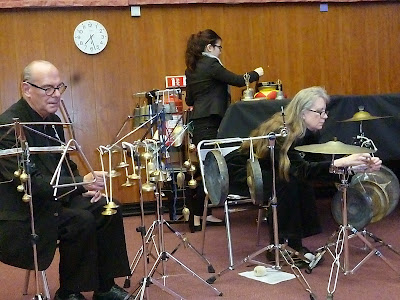 Hoplites! Greeks at War then had its chance to meet the public and it looked amazing on a full cinema-size screen. If you haven’t seen it yet, don’t miss it! Every Soldier. After the first viewing, Sonya picked out a few details to discuss, such as the decisions made about representing formation and fighting styles, how the extra troops were created, and the use of existing vase images to guide the representation of elements such as the liver-examination and the postures of the fallen soldiers. This was followed by a second viewing of the animation, which received a warm response from the diverse audience of ancient historians, archaeologists, teachers, music-lovers, animation-lovers, and ancient world enthusiasts.

At the reception that followed, the audience enjoyed food and drink as they looked through the exhibition, visited the Ure Museum, and watched other Panoply animations on a giant TV screen. University of Roehampton student, Gabrielle Turner was on-hand to tell people how she went about curating the Every Soldier has a Story display-case (more on that here soon), and Steve explained more about his work creating the Hoplites! animation 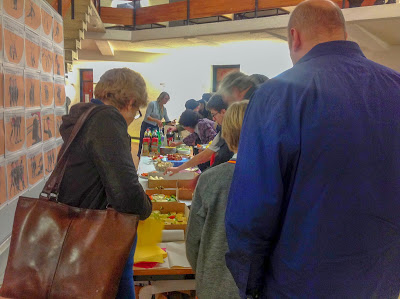 Huge thanks to everyone who came. Special thanks to Thiasos for a wonderful performance. And very grateful thanks to our reception sponsors, the Ure Museum, the Department of Classics at Reading, and Bloomsbury Publishing. It was a wonderful evening that did justice to all the creativity that has been inspired by this wonderful artefact. Now we’re looking forward to Hoplites! Greeks at War appearing in any homes and classrooms around the world where there’s interest in ancient Greece.

Posted by Sonya Nevin and Steve Simons at 13:42